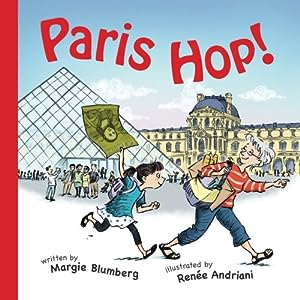 Paris Hop!, written by Margie Blumberg and illustrated by Renée Andriani, is a story about Grandma taking her granddaughter to the Eiffel Tower on a visit to Paris. They are determined to see how the city looks with the sun shining over it, but they continue to get distracted by the other wonderful places and sights of “Paree,” such as museums and clothing stores. Will they be able to make it there before the sun sets? And if they don’t, how will their day trip to Paris end?

This was a cute little story that children and their parents (and grandparents) will thoroughly enjoy. While children will enjoy the entertaining rhyming quality of the book, they will also have fun learning common French phrases. Parents don’t need to worry about mispronouncing or not understanding these phrases because there is a very helpful glossary in the beginning of the book that clearly states the meaning and the pronunciation for each word and phrase. And the actual story is just so charming. I adore the idea of a grandmother and her granddaughter exploring Paris together. Children will get to experience the culture of Paris through the many stops this young girl and her grandmother make. Plus, the illustrations make it that much more delightful. The vibrant colors and adorable images will keep children engaged and wanting to read the book over and over again. Margie Blumberg definitely has a new fan, and I’m sure that Paris Hop! will be among my daughter’s favorites. 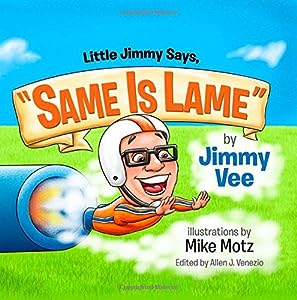 Little Jimmy Says, "Same Is Lame" by Jimmy Vee is an entertaining book for children. Jimmy is just five feet tall and unusually small for a man. He tells us how every individual is different from each other and each one has their own special ability which makes them unique. Jimmy can do a lot of things because he is short. He also likes the fact that he stands out in a crowd instead of getting lost in it. Many a time, Jimmy is the butt of jokes because of his size. This book conveys a beautiful message of learning to accept one's uniqueness and to use it in a positive manner.

The theme is very interesting and relevant and the author has touched on a topic happening in society. He has put it across beautifully so that kids can understand it well. The illustrations are lively and they convey the concept with a lot of clarity and crispness. It is a highly encouraging book that will boost the confidence of readers and motivate them to succeed, irrespective of their drawbacks.

The message: 'We are all special in our own unique way. We all have our talents to work and to play' is an awesome message for kids to rid them of their insecurities and convert their so-called negatives into positive points. I would recommend this book for all kids. It is a must-have in everyone's personal collection, as well as schools and libraries. Little Jimmy is indeed an inspiration to all of us! 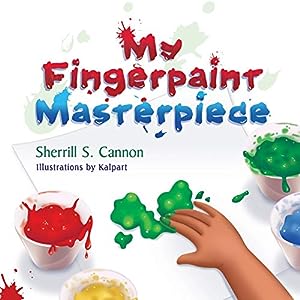 Beauty certainly is in the eye of the beholder and nothing illustrates that truth better than My Fingerpaint Masterpiece written by Sherrill S. Cannon and illustrated by Kalpart. When a child is interrupted from a fingerpainting of his dog while at school, it is the start of a chain of events that leads one to wonder exactly how people determine what art becomes a masterpiece. On the way home, the child’s painting is blown out of his hands and lands in an art shop. It is then accidentally entered into an art contest and after the judges turn it in every direction, they decide that it is the winning entry. Disgusted with the outcome and the way that everyone is attempting to discover the deep meaning of his painting, the child tries to get everyone’s attention, but no one will believe him.

Sherrill S. Cannon and Kalpart have created a delightful story that actually gets right to the heart of what I think about some of the “masterpieces” that I have seen. My Fingerpaint Masterpiece expresses a truth about abstract art that few would ever admit. Splash several different colors on a canvas and anyone who is an “official critic” with enough imagination to make it into something will determine that it is a masterpiece. The colorful interpretation of the story by the illustrator of this story far exceeds many of the “masterpieces” in the modern art world in my opinion. Funny, colorful and brilliant, My Fingerpaint Masterpiece will put a satisfied smile on your face as you consider how silly some people can be about art. 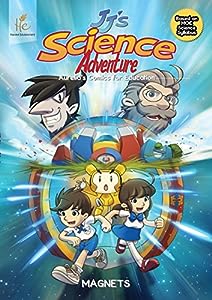 Children are naturally curious but sometimes the attention span doesn't match the subject. Aurelia Tan and Nicholas Liem (illustrator) have mastered it all in their wonderful book, JJ's Science Adventure: Magnets. Through a cartoon adventure, magnets and how they work are explained in the story. It's a fast paced story line that can be read to your children or enjoyed by them alone.

Educational material does not have to be tedious or boring! Magnets are one science project that typically keep the students' attention but add in a cartoon factor and you have yourself a winner. The length of this book is just right. It is not so short that it leaves you wanting more or too long to make you wish it were over (kids..you know what I mean). I would have loved to have had this book when I was homeschooling my daughter. Having used trains as an example of how magnets attract and repel is nothing short of brilliant. Author Aurelia Tan and illustrator Nicholas Liem do a fine job of captivating their audience. I found myself doing research on the two types of trains after I was finished with the book. Is there anything better than educational materials that draw more interest to the subject? This is a book that must be in every children's section of libraries, whether public or school. It is so much fun that it could even be used for cub scout or girl scout type meetings or functions. I give this wonderful book two thumbs, way up in the sky.

Clarence and the Traveling Circus 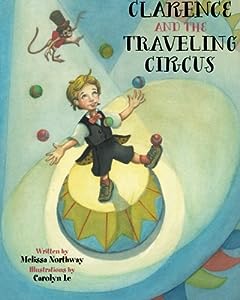 Clarence and the Traveling Circus is a children's storybook written by Melissa Northway and illustrated by Carolyn Le. Clarence is so clumsy that the kids in town call him Clumsy Clarence. He's useless at sports, but his clumsiness disappears when he's juggling. Clarence can juggle anything and even used to juggle his dog and cat until the cat hid up in a tree. When Clarence's dad tells him that the circus is coming to town and that they're having juggler try-outs, Clarence gets excited and dreams of being chosen. He's scared to appear at the audition, however, as he figures everyone will expect him to be clumsy, so he disguises himself with a caped costume and a mask. When it's his turn, Clarence is fabulous and definitely the best juggler in town.

Melissa Northway's Clarence and the Traveling Circus has such a positive and inspirational message. Clarence overcomes his fears and shines. He's able to rise above the dreaded name, Clumsy Clarence, and be a star. Carolyn Le's artwork beautifully complements the story. Each panel is intricate and painted in glowing colors. I found myself getting lost in the details of each picture. There's a great bonus in the back of the book for aspiring Clarences - a step-by-step guide to juggling! I've never gotten past juggling two balls at the same time and can't wait to try adding more using these instructions. There are also circus facts, exercises and learning challenges back there as well. Clarence and the Travelling Circus put a smile on my face as I read it, and I'm still smiling. It's very highly recommended.