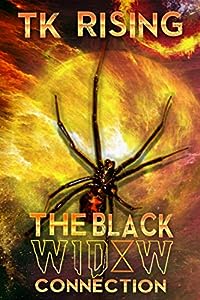 Attacked by a shadowman, tormented by inexplicable events, and plagued with apocalyptic dreams, Tracy Kirin thought she was up against a demon from Hell. But what she finds is an ancient alien with a grudge that wants her dead. 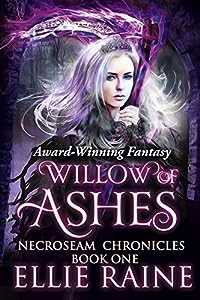 The End of Existence is coming. The five realms of Nirus are too distracted by soul-eating demons and civil wars to notice the true danger. Desperate to stop it, the King of Dreams has foreseen the world's last hope... a pair of twin Necromancers with split magic. He sends his granddaughter on a secret mission to find them. But it may be too late.

For one of these champions is thought dead... and his soul is trapped inside his twin.

So begins a dangerous journey of discovery as the coexisting twins set out in search of Xavier's missing body, unaware of their mysterious destiny. For prophecy says the fate of the world hinges on these two brothers trapped inside one body..

But will they bring extinction or salvation?

A breathtaking Epic Fantasy series that just keeps getting better with every book. Get ready to embark on a fascinating journey with epic adventures, thrilling action, addictive world-building, intricate magic systems, and unpredictable plots. Catch up on the full NecroSeam Chronicles series in time for the explosive conclusion. Blossom of Gold (Book 5) coming out March, 2020!

All books in the series continuously awarded five-stars by Readers' Favorite Review.

Willow of Ashes (Book 1)
"One of the most fascinating universes I have ever encountered... a world rich, mysterious, inviting, and frightening at the same time...you'll want to visit it again and again."

Orbs of Azure (Book 2)
"This is that epic fantasy genre that draws you in with magic,mysteries, and epic resolutions to seemingly unsolvable problems. Rich in detail, with heroes larger than life, sometimes even larger than death itself, Orbs of Azure is a fantasy to remember."


Pearl of Emerald (Book 3)
"Ellie Raine never disappoints me with her unique characters and complex plots. This third offering in the series is as good as the first two, if not better... excellent world building and complex systems of magic."

The Indivisible and the Void 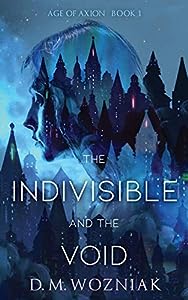 War. Magic. A lover's betrayal. A dark secret lies beneath them all.

Each year, Democryos sends his brightest student into the war-torn countryside to work magic. But when his wife leaves him for a mysterious stranger, he finds his own life ravaged.

Forsaking the comfort of the citadel, he searches for her, traveling through the same forgotten lands where he sent his students. Along the way, he befriends an elusive member of the king’s harem, a holy man harboring guilt, and a maimed soldier. Together, they stumble upon a key—not only to the war, but to understanding the magic of voidance itself. 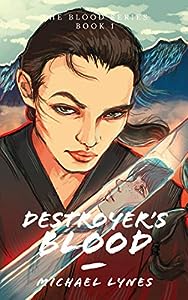 Blood is mightier than the Sword
Dev is a Master Thief, the son of Prometheus, and a bad-boy with a talking magic sword called Betrayer.
Newly named the Protector of Men by his Titan father, he and Tray prefer to stay far away from Olympus and the squabbles of the Gods. That is until Hermes interrupts them as they climb up Half-Dome with an urgent summons from Zeus.
Before he can finish, his body is torn to shreds by their Enemy. . .the DESTROYER.
Find out what happens next - read DESTROYER's Blood. . .Book 1 of The Blood Series: A Fantasy Novel by Michael Lynes
Winner - Finalist 2019 IAN Book of the Year Awards - category FANTASYSOLO Medalist - New Apple Summer EBook 2019 - Young Adult FANTASY
WINNER - Readers Favorite SILVER Medal - 2019 - Fantasy
Winner Indie B.R.A.G Medallion
Winner New Apple Literary Official Selection - FANTASY
Dev shook his head, spitting out dust and rock chips. The last rays of the setting sun stained the ground crimson. "Betrayer," he murmured, ears still ringing from the terrific explosion, "we have a problem."
The cryptic message from Olympus changes everything... One moment Devcalion and Betrayer are free, climbing up Half Dome without a care in the world, the next they are dragged into battle with the Destroyer, Zeus's ancient foe.
The Dark Power is merciless, and time is running out. It's up to Dev and Tray to try to stop him, or the world of men and gods is doomed.
Book One of the Blood Series - Destroyer's Blood by award-winning author - Michael Lynes

Blood of the Isir Book 2 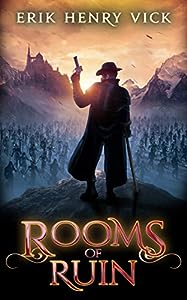 Hank Jensen rescued his family from the Bristol Butchers, but in so doing, trapped them in a land straight out of the Norse Sagas.

He and his family are not safe, however--not while the Dark Queen and her henchmen roam free. When a dark figure swathed in power tells Hank one of his friends will betray him, Hank can’t—won’t—believe the worst. She urges him to eliminate the threat—to kill the person she suspects, or at least send the potential betrayer packing. But Hank is not the kind of man that turns his back on his friends.

Hank, his family, and his cadre of Isir supporters must retake the Rooms of Ruin, an ancient fortress that holds the key to getting home. But the journey is arduous and long, and he will face dire threats along the way: his curse, dragons, demons, evil men, Svartalfar, and dark, vengeful gods.

Grab your copy and travel to the Rooms of Ruin with Hank and the Isir! 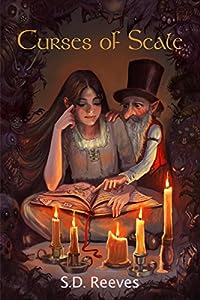 Sixteen-year-old Niena wants nothing more than to attend an elite bardic college, but when the dragon that shattered the empire awakens again she finds herself on the run, through the fey realm of Fairhome, to the city where she was born. On her trail are her army veteran grandfather, thrown into a commander's role he doesn't want, the lord of the fairies, trying to steer her to his own ends, and the husband she won't meet for fifteen years. If she kills the dragon, she'll save everyone she holds dear. But if she kills the dragon, she's cursed instead to become it.

Curses of Scale is the 2018 First Place Winner of Red City Review’s Young Adult Category, and an Official Selection of the 2018 New Apple Literary Awards. It also has the distinction of being a finalist in the following awards:

"Curses of Scale is a Pandora’s box of world-building elements, and Reeves shows great skill at parceling out the pieces of lore and mystery that today’s fantasy readers crave. Readers will be sure to enjoy this crafty, utterly transportive novel." ~Red City Review 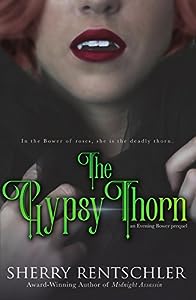 When Atlantis fell into the sea, a single creature survived--a scarlet phoenix. She escaped with ancient man’s historical record, The Great Book of Forgetting. This book recorded mankind’s every legend and prophecy. Only the Archangel of Death understood man’s survival depended on the fulfillment of one particular prophecy, that of the scarlet phoenix.

Rhea is the scarlet phoenix, transmuted into human form with wings of fire. She hides The Great Book from those seeking to steal it and prevent the prophecy. The Archangel befriends and protects her as he watches her traverse time and mold history. She is the proverbial rose that blooms in a future garden.

Jean-Louis Riviere is an aristocrat who became a vampire during the American Revolution. He is haunted by an ill wind whispering strange and incredible possibilities. His family ties will lure those who wish to destroy the prophecy; however, the Archangel also knows his blood is all that will save the rose and secure the future

Drahomira is a gypsy, a bastard princess, and a vampire. The Archangel of Death chose her to protect the phoenix because she is an irreverent killer but loyal to family. She will journey across continents and be the catalyst that brings Rhea and Jean-Louis together. First, she must leave her people, her throne, and her lover, cross a continent for vengeance, die, and be reborn. Only then will she discover that she is the rose’s legendary thorn in the Evening Bower.

The Fall of Lilith 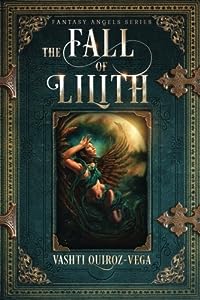 “I merely assisted you in doing what you desired all along.” So says Lilith, the most exquisite of the angels. The two most important pledges an angel makes to God are those of obedience and celibacy, and dire consequences await any who break their oaths. At first, the angels are happy in their celestial home, learning and exploring together. As they grow older, though, Lilith begins to question these pledges, which now seem arbitrary and stifling. Her challenge of the status quo leads to disagreement, jealousy, and strife among her peers. As the arguing and acrimony grow, lines are drawn and sides are chosen. Is war inevitable? Filled with robust characters, incredible landscapes, and exciting action, The Fall of Lilith is an epic tale of seduction, betrayal, and revenge. Free Will involves asking difficult questions and making hard choices, choices that require strength and sacrifice. These decisions can tear apart friendships and cause rifts between allies. They can even threaten the foundations of Heaven. 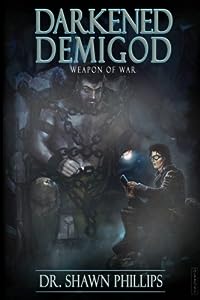 Imprisoned miles below the surface of the post-apocalyptic Earth he crafted, the first and last, modern-day demigod must come to terms with his failings that led to global annihilation. From the charcoaled ashes of remorse and uncontrollable anger must rise the embodiment of what he was meant to be—a savior for all humankind. However, who he is saving them from and why propels this demigod on a pained journey beyond his home planet, where he must face much more than just an advanced offshoot of humanity. He and the diminutive Bookworm will fight for Earth, but at a cost even a demigod will not be able to rectify. 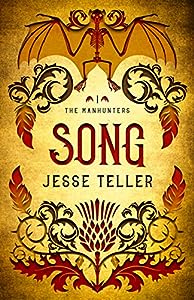 Magic and Mayhem. Deception and Lore.

This gritty dark fantasy ushers you into a dangerous world of tarnished heroes and magic-slinging fugitives.

Some of the darkest minds in Perilisc attacked Mending Keep, releasing all its prisoners.

Despite his strained relationship with the crown, Rayph Ivoryfist calls old friends to his aid in a subversive attempt to protect King Nardoc and thwart terrorist plots to ruin the Festival of Blossoms. But someone else is targeting Rayph, and even his fellow Manhunters might not be enough to save him.

Dive into the stunning exploits of this bold and daring crew!