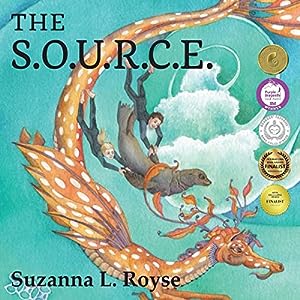 The S.O.U.R.C.E. is a children’s novel written for readers between the ages of 8 and 12. Created by Suzanna Lou Royse, The S.O.U.R.C.E. follows the story of a ragtag band of aquatic animals in their quest to escape Ocean World and make their way home to the sea. Simultaneously, two skaters, Ryder and Silk, make their way to the ocean on the trail of some washed-out trash. When an unexpected swell tosses the two children into the ocean, they find themselves in desperate need of some friends. It is then that these two tales converge in the unlikeliest of ways. Join Ryder, Silk, Nikki, Duster, Bubba, Rio, and many others as they realize the ocean is the source of all life on the planet, and embark on a quest to protect the sea

While listening to this story, I found The S.O.U.R.C.E. was written like a children’s version of a Walt Morey book, which is my way of paying a great compliment to the author Royse, and the way the narrative unfolds. It also had many similarities in the way the animals think and speak to the writing of C.S. Lewis in The Chronicles of Narnia. The author does a wonderful job of portraying each animal with believable characteristics while imbuing them with a human-like quality. Along with a well-written script and cleverly thought-out plot, The S.O.U.R.C.E. possesses a valuable lesson that it fleshes out for its audience. It doesn’t try to mask its true intentions and is all the better for it. I would recommend this to young readers who can finish a chapter book, though it would also be suitable for parents in need of bedtime story material. My gratitude to the author for allowing me to partake in this story which I plan to buy for my own children soon.

Narrated by Frankie Corzo, the audiobook was nicely presented, with well-paced and believable voices. The professional sound mixing by Deyan Audio provided a high-quality feel and helped the story stay fresh.

The Case of the Absent Answers 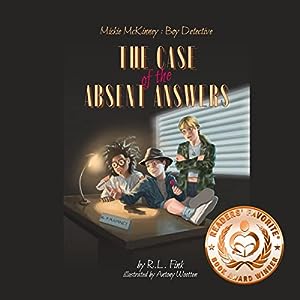 The Case of the Absent Answers: Mickie McKinney, Boy Detective is a children’s audiobook, written by R.L. Fink with narration by Hannah Edelson. This is an engaging mystery filled with humor, action, and hard-won wisdom. Mickie is a student at Maple Ridge Middle School who has dedicated himself to solving his school's ongoing mysteries--from what exactly is in some of the cafeteria food to the many cases of students with missing assignments. Mickie is a keen and observant detective who often calls upon one of his peers, Burners, for technical advice. When Sam, a new girl at the school, is implicated in a crime she may or may not have committed, Mickie takes on the case. He is determined to uncover the truth even if it leads him to some precarious situations. The matter is complicated when Tommy gets involved, an intimidating boy who often resorts to bullying others.

R.L. Fink’s The Case of the Absent Answers is an entertaining read with many laugh-out-loud moments and likable and relatable characters. In addition to being a fun and lively story, there are moments throughout that highlight positive ways to resolve conflict and deal with bullying behavior. While Mickie is investigating the case involving Sam, he is given the opportunity to do what is right and he displays courage and wisdom beyond his years, providing a great example for young readers who may likely find themselves in a similar situation. Fink captures the ups and downs of daily life in a middle school; the fun, the drama, and all the challenges. Readers will be rooting for Mickie and his friends to solve this mystery and for justice to be served. The Case of the Absent Answers is an enjoyable and highly recommended read.

The narration of The Case of the Absent Answers is excellent, clear, and concise. Hannah Edelson’s lively narration brings all the characters to life and creates a very realistic middle school atmosphere. The varying moods and emotions of Mickie and his friends are accurately captured from doubt and fear to trust and amusement, making this audiobook a fun and interesting listening experience. 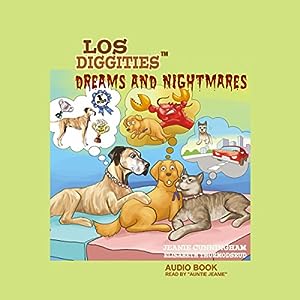 Los Diggities, Dreams and Nightmares by Jeanie Cunningham and Elisabeth Thormodsrud is an entertaining audiobook approximately 45 minutes in length about a young dog, Oso, who wakes up after a nightmare surrounded by his older friends, Xena and Oscar. Oso explains his nightmare to his friends, and they share their nightmares to calm him down. The nightmares include Xena almost drowning in a swimming pool to Oscar's car accident - even though these were actual experiences, not dreams. But apart from the nightmares, they also have good dreams of chasing rabbits. The stories are mainly centered around their fear of abandonment and good and poor treatment from people. Oso learns from the older dogs, and as they share their stories, they learn more about each other. Soon Oso is no longer scared to fall asleep and dream.

Los Diggities, Dreams and Nightmares by Jeanie Cunningham and Elisabeth Thormodsrud is terrific. The characters were entertaining, and credit should also go to the narrator, Auntie Jeanie, who most ably created unique and lovable voices for the three dogs: Oso, Xena, and Oscar. Oso is the curious and innocent young puppy, Xena is the sassy and street-smart female dog, and Oscar is the older male who is carefree, happy-go-lucky, charming, and a wise old soul. I loved listening to this well-performed audiobook, and I found myself smiling throughout and long after the audiobook had ended. It was easy to relate to all the stories shared by the dogs, some sad, but all endearing you to the characters. Los Diggities, Dreams, and Nightmares is creative, delightful, and entertaining.

A Dog's Story of Royalty and Loyalty 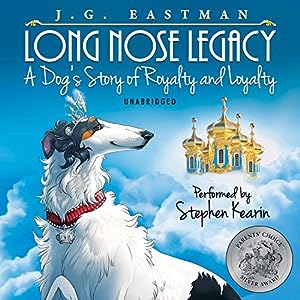 Long Nose Legacy: A Dog’s Story of Royalty and Loyalty is a charming work of children’s fiction written by Judi Eastman with narration provided by Stephen Kearin. This audiobook version of the story is such a wonderful framing device - to take the well-worn themes of family drama and personal loyalty and give them an original twist suitable for young listeners, using the private lives of show dogs as the backdrop. After Carnegie fails to recreate her mother’s glory days as a prize-winning show dog in favor of her flawless sister Madison, she decides to leave her home in the USA and head for the Imperial Palace in Russia to live like royalty.

Carnegie and Madison form the perfect sibling dynamic with layers of rivalry and resentment as well as love and obligation, a nuanced and relatable relationship that young listeners will adore. There are a number of parables in Carnegie’s story about the expectations of family and the pressure to achieve that many children suffer from, and Judi Eastman has created a well-considered and beautifully presented opportunity for parents to discuss these feelings with their children. This kind of children’s writing is something that should be lauded as it provides not just a memorable story with charming characters but is also a constructive tool for improving children’s lives. I must compliment Stephen Kearin’s excellent narration which is a perfect fit for Long Nose Legacy’s whimsical, heartfelt, and fun story. 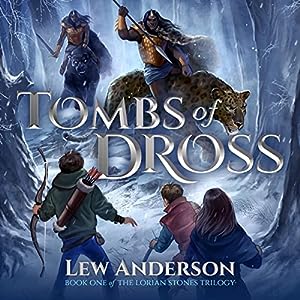 In Tombs of Dross by Lew Anderson, siblings Isaac, Zac, and Breezy discover a mysterious tone pillar while exploring their extensive property. They try to decipher the meaning behind the script on the stones, but it really doesn’t make much sense. Even more mysterious is their sudden immersion into an alternative dimension, a world quite different from theirs and very dangerous. They are given a quest to find an old book. The adventure that follows is one fraught with unexpected confrontations with evil creatures that set out to prevent them from completing their quest. In the difficult circumstances they confront, they must band together to seek a way out and, in so doing, the quest becomes more than merely searching for an old book; it’s a quest to discover who they really are!

In the epic style of C.S. Lewis's Narnia books and Tolkien’s Lord of the Rings, Lew Anderson’s middle-grade novel, Tombs of Dross, leads young readers on adventures that will captivate them from the start to the very end. This is the first book in the Lorian Stones Trilogy and it doesn’t disappoint. Presented in audio-book format, the plot moves quickly with considerable engaging descriptive narrative passages and revealing and believable dialogue. Author Lew Anderson narrates this book himself. The narrator’s voice varies in tone to depict the different characters when they’re talking. With fascinating and imaginative creatures on both sides, good and evil, this is a fantasy adventure for the entire family to enjoy and embark upon.

How To Get There ? How To Escape ? 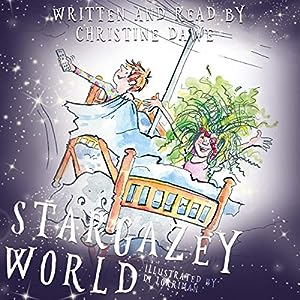 Stargazey World by Christine Dawe is a fast-paced children’s fantasy adventure filled with humor. Its protagonist is Sheena Robinson, a scouser (person from Liverpool) with a mass of green hair, a dad who’s always telling corny jokes, and a best friend called Lizzy. Sheena hates school and doesn’t concentrate long enough to get her geography and spelling lessons right. During the summer holidays, she acts as a bridesmaid at her cousin Pauline’s wedding in Cornwall. There her days are filled with family outings in the countryside, while her nights involve exciting travels in a flying bunkbed to the five continents of the world. In these distant places, Sheena battles harsh weather conditions, helps to free the animals on the bedroom wallpaper in her cousin's room, and discovers her own strengths.

Stargazey World is a clever story with a strong and constant play on words, something I especially enjoyed. Hassocks (cushions for kneeling on in church) become violent Cossacks, tiddly oggies (Cornish pasties) become, well, tiddly, and a zebra in Africa is seen crossing. All of Sheena’s daytime activities merge into the nighttime dream-cum-fantasy, revealing both the importance of the character’s actions in directing her own life and Christine Dawe’s meticulous crafting of a story in which every detail matters. Messages such as the importance of family, acceptance of people for who they are, environmental disasters like drought and fire, and the respect for cultural differences are lightly dealt with.

The narrator of an audiobook can make or break the experience for me as a listener and Christine Dawe, who narrates her own book, is brilliant! Her tone perfectly captures emotions and thoughts, adds wonderfully to the already strong characterization in the book, and entertains with a range of accents. These accents include northern and southern English, Australian, South African, Indian, American, and Spanish/French/German, all done in quickly switching dialogue. Although listening as opposed to reading meant that I missed seeing the creative spelling in the story, I loved every minute of the experience.