Book One: The Carnelian 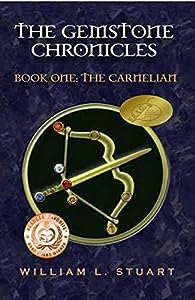 Elves, magic, stolen gemstones, a quest to restore the balance between good and evil, and who is the mysterious Keeper?


When Aidan and Maggie find a fairy cross while rock hunting with their grandfather, it’s just an oddity. When they discover an elf imprisoned in the stone and free him, Dark Elves attack the siblings and their grandparents, forcing them to flee to Celahir, magical home of the Elves.


The family, with the help of their Elven friends, embarks on a dangerous adventure to find the first of the four stolen gems, the Carnelian. Without restoration of the stones, the balance between good and evil is slipping toward evil - in both Celahir and the human world… 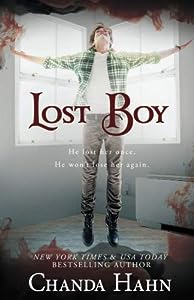 After nearly losing Wendy, Peter returns her to her family but fears she may not be safe from Hook. Torn between protecting Wendy and leading the lost boys, he must decide to fulfill his duty or follow his heart.Wendy pans, and awakes in her bedroom, clothes stained in blood, with no memories of Peter or Neverland. Wendy struggles to return to her normal life, for shadows plague her during the day, and where shadows roam—monsters follow.With Hook closing in on the lost boys’ hideout, Peter faces a betrayer from within the ranks of Neverwood. The final battle is on the horizon, and the secret to victory lies with the shadows, but only one can hear their voice, the Lost Girl. 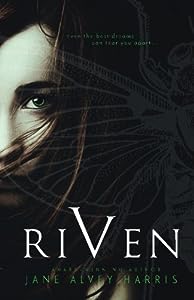 Which reality would you choose? Seventeen year-old Emily’s dad is in prison for securities fraud and her mom's strung-out on pain meds, leaving Emily to parent herself and her younger brothers and sister. She’s got things mostly under control until a couple weeks before Dad’s release, when voices start whispering in her head, and Gabe, the hot lifeguard at the pool, notices the strange brands engraved on her arm...the ones she's trying desperately to hide. Emily doesn't know how the symbols got there or what they mean. They appeared overnight and now they're infected and bleeding. She's pretty sure she's losing her mind. Stress, insomnia, and her wounded egos drive Emily to self-medicate, which has to be why the nightmares from her childhood have resurfaced, why they're commandeering her conscious even when she's awake. It has to be why the fairytale creatures she created as a little girl insist they need her help. Triggered by the return of her childhood abuser and unable to cope with reality, Emily slips completely inside her elaborate fantasy world. She's powerful in the First Realm, maybe even more powerful than her attacker. It would be so easy to stay there, to lose herself in enchantment...to lose herself in love. But something sinister lurks in the forest shadows. Emily soon discovers her demons have followed her inside her fairytale. They're hunting her. With the help of the Fae, she frantically searches for the weapons she needs to defeat her greatest fears and escape back to reality before the man who tortured her can prey on her younger brothers and sister, too. Time is running out... 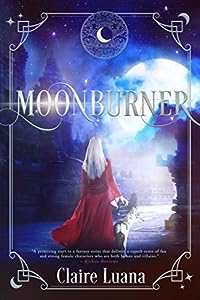 Mulan meets Sarah J Maas in this thrilling tale filled with celestial magic, death-defying adventure, and enduring friendships. Kai is a Moonburner—a female sorceress reviled by her people and normally killed at birth. Except Kai's parents saved her by disguising her as a boy—a ruse they've kept up for almost seventeen years. But when her village is attacked, Kai’s secret is revealed and she’s sentenced to death. Thankfully, the gods aren’t done with Kai. Despite the odds stacked against her, she escapes her fate, undertaking a harrowing journey to a land where Moonburners are revered and trained as warriors. But her new home has dangers of its own—the ancient war against the male Sunburners has led the Moonburners down a dark path that could destroy all magic. And Kai, armed only with a secret from her past and a handsome but dangerous ally, may be the only one who can prevent the destruction of her people... For fans of: Teen Science Fiction and Fantasy Young Adult Fantasy Young Adult Action & Adventure Coming of Age Strong female protagonists

Secrets of the Home Wood 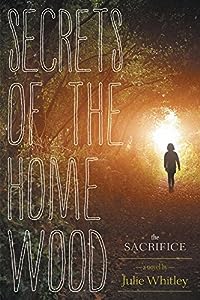 For Jonathon, the Home Wood that borders his grandfather’s farm has always been a source of mystery and dread. Strange half-heard rumours passed among aunts, uncles and cousins never quite add up.
More than twenty years ago, his father—when he was Jonathon’s age—was swallowed up by the Home Wood for more than a day and came back badly injured. That was when his grandfather forbade any family member from venturing back there.
And so when, from his bedroom window one morning, Jonathon sees his father once again cross into the Home Wood, he knows something is very wrong. Deceiving his grandfather, Jonathon sets out after his father and makes his way, for the first time in his life, into the woods.
What he finds there is beyond even his wildest imagination. 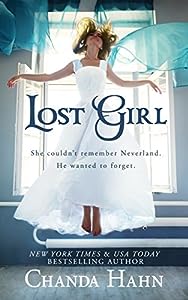 Wendy doesn't remember anything about Neverland—or the experiments done on her there as a child. Seven years later, all she wants is a normal life, but shape-shifting shadows plague her dreams and turn her life into a waking nightmare. When the shadows attack at a football game and a boy disappears right in front of her, she realizes these wraith-like shadows are real. They’re not just haunting—they’re hunting.

A mysterious boy named Peter, his foul-mouthed sidekick, and a band of misfit boys intervene before Wendy faces a similar fate. But can they trust Wendy enough to take her to Neverwood Academy and reveal all of their hidden secrets when she's hiding a secret of her own, or will the dreaded Red Skulls find her and drag her back to Neverland? 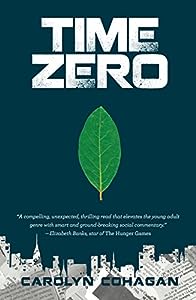 Fifteen-year-old Mina Clark lives in a future Manhattan that is ruled by extremists. Girls aren’t allowed to get an education, they need permission to speak to boys, and all marriages are negotiated by contract. But Mina’s grandmother has secretly been teaching her to read, leading Mina down a path of rebellion, romance, and danger that not only threatens to destroy her family’s reputation, it could get Mina killed.

Suspenseful and empowering, Time Zero is about what it’s like to be powerless, underestimated, and manipulated and what it takes to go against society to assert who you actually want to be. 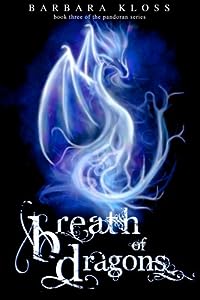 After Prince Alaric's death, Daria and Alex set off in search of the legendary box of the Pandors'. The box is famed to hold a secret of power—one strong enough to overcome Lord Eris and the shield of power he stole from Valdon. Daria doesn't know where the box is hidden, but she can't ignore the silent urging, beckoning her to the land of Pendel—the land her mother, Aurora Pandor, was from. Time is running out. Lord Eris's army of shadowguard vastly outnumber Valdon's forces, and if Daria doesn't find the box in time, Valdon will need reinforcements from the other territories to survive. But those territories will not hand over their armies willingly, not without Daria's hand in marriage. And there is another, older power rising, one that hasn't been seen in centuries—one thought lost since the days of Galahad: the dragons. 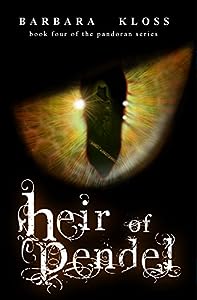 Daria has fled to Orindor. She's left the man she loves to accept a marriage proposal from a man she doesn't, hoping to save the people of Gaia from her tyrant uncle. She needs the forces that Lord Danton Pontefract's hand in marriage will provide, and she's running out of time. Her uncle's army of shadowguard have laid siege to the castle of Valdon--where Stefan resides.

Meanwhile, Alexander Del Conte, with Thaddeus and Vera in tow, fights to rally what's left of a broken people in order to lead them in battle against Eris's shadowguard.

But Gaia is just a piece of what Eris wants. And if he isn't stopped, he'll turn his armies toward Earth.

Rise of the Sea Witch 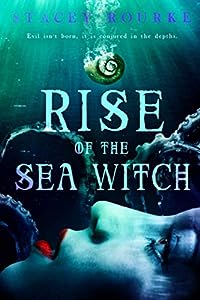 Details of the sea witch’s banishment have been exaggerated. The body count that preempted it was not. Once an illustrious princess, her hands and tentacles were stained with the blood of thousands. No one could comprehend how the hooks of madness dragged her down from her life of privilege. Born Princess Vanessa of Atlantica, the ambitious young royal was one of two children born to the great King Poseidon. She and her brother, Triton, were groomed from birth to rule. Yet only one would ascend that coveted throne. While carefree Triton flits through his training with a cavalier demeanor and beguiling charm, Vanessa’s hunger for her father’s acceptance drives her to push herself to the limits of magic, and combat to become a leader worthy of her people. When war against the humans ravages their once regal kingdom, political sides are chosen. Factions from the seven seas challenge the existing leadership, pitting Vanessa against her brother in a vicious battle for the crown. Traitors are exposed, dark family secrets revealed, and a once strong sibling bond is strained to its breaking point. Only when the ink black waters from the ultimate betrayal rescind, will the truth be known of how the villainous sea witch rose with one name on her vengeful lips--Triton.REVIEWS:"Reading this story from Vanessa’s point of view was truly fascinating and I was 100% emotionally engaged with this character. So, to see how Vanessa was pushed and manipulated into a situation where the outcome led to Ursela the Sea Witch was nothing short of heartbreaking. Still, despite everything that was happening to her, Vanessa loved her brother and it makes me tear up every time I think about it." -The Genre Minx Book Reviews"Rise of the Sea Witch is a fantastic fairytale. I was instantly impressed by Vanessa. She's strong, talented, capable and she cares deeply, but she's being treated unfairly. She hardly has any support and she repeatedly has to fight battles against those who should protect her. I loved her determination and resilience. She's going through so much, but she never gives up, even if her heart is being shattered and those who should stand by her betray her in the worst possible way. I was fascinated by her personality and her journey from beginning to end." -Amazon Review"Vanessa has very big heart and has always wanted what was best for her people but after a while when people just keep turning against you and putting you down it starts to take its toll and it will and can turn the softest hearts hard and that is just what happens to Vanessa. Her poor little merheart can’t take it anymore and must fight back for what is right." -Avid Reader "Rise of the Sea Witch is fraught with unimaginable pain and loss, but also the underlying theme of reinventing oneself, and even when facing uncertainty, accepting and owning your own actions. Be who you were born to be." -Amazon Review
Contact Author -