Bernie and the Wizards 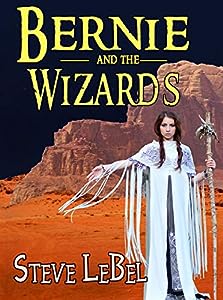 The Universe Builders: Bernie and The Wizards by Steve LeBel is the long anticipated sequel to Bernie and the Putty. This story picks up one week after Bernie's first world wins the prestigious universe award. Armed with his ingenuity and problem solving skills, Bernie's first assignment is to fix a veteran's world by solving the problem of why the harvesting of the two designated crops that this world has created is at a standstill. After meeting with the world's creator, Bernie decides to drop in amongst the population to gather some information, in the guise of Wedon, an old weary traveler to all but a shaman named Reva. She uses a spell that reveals his true form. Suspecting that Bernie is more than he appears, she hopes that he might offer to help and maybe even do some healing for her villagers.

Mr LeBel's writing shifts between Bernie's assignment and his friends, Lenny and Suzie, whom he meets during breaks from work. They also give support by way of advice and tidbits of knowledge that help Bernie to understand things in his assignment. LeBel's characters have a certain quality about them that helps move this story along at a pace that forced this reader to turn each page with bated breath. When Bernie is reunited with his father at a banquet, they are both seated as guests of honor. And the results of meeting an ancient God gives Bernie quite the surprise. Wow ! This character driven book was well worth the wait. Bravo! Encore!

The Reach Between Worlds 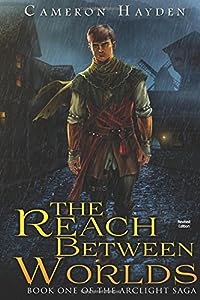 The Reach Between Worlds: The Arclight Saga, Book 1 is an epic, coming of age fantasy for young adults and adults, written by C.M. Hayden. Taro realized that having anything to do with Victor Mathan was a perilous undertaking at best, and he knew his father would be angry if he found out. But with both of his parents ill at home, Taro had to scrape enough money together to feed his family. He was their only answer. Taro’s little sister, Nima, was already fretting that Taro had agreed to make the delivery without setting a price beforehand as they approached the large door to the mansion. Victor Mathan was the richest man in Ashwick, but his reputation was an unsavory one. Mathan’s manservant was all set to send the brother and sister away, until the man himself stepped up and invited them in. Taro wanted to get his money and go, but Nima was intrigued by Mathan’s offer of another job for substantially more money. Taro insisted, and the two left with a special enchanted piece of parchment that would enable them to contact Mathan if they should change their minds. Taro knew Nima would be upset at the lost opportunity, even as he realized he should never have involved her in this transaction. She seemed to enjoy it all a bit too much and hadn’t realized the danger they had both been in. Later that night, Taro went to speak with her and was shocked to discover that she was gone. He found the parchment on her nightstand with her precise handwriting, agreeing to the job, and he saw Mathan’s response.

“It might’ve seemed like a novelty, but to Taro, feeling actual magic was a wonder unlike anything he’d ever experienced. For the first time in his life, he felt powerful.” C.M. Hayden’s iconic young hero, Taro, has a prosthetic foot that fits poorly and gives him trouble, and a grown-up’s share of responsibility to bear. Yet, somehow, he manages to master fears, physics, and the most stacked-against-him odds as he and his little sister apply for admission to the Magisterium in Endra Edun. With little money and the awareness that great peril was poised to fall upon them if their purpose in posing as students was discovered, Taro finds untold worlds, challenges, and camaraderie await him as he prepares along with his fellow students for the year-end trial. I was at first somewhat reluctant to take on yet another epic fantasy novel, but I’m very glad that I did. You see, The Reach Between Worlds: The Arclight Saga, Book 1 is more than just an epic fantasy or a coming of age novel or even an archetypal quest story -- it’s all those things and much more. There’s an original, fresh and exciting adventure tale following students in a school that will get even the most jaded Harry Potter reader thrilled at rediscovering magical classes, classes unlike any ever found in Hogwarts. Steampunk fans who never seem to get their fill of great stories to follow will also find their appetites whetted. As I read, I reveled in the fact that Hayden’s story had that touch of greatness for me that hearkened back to the classic high fantasy and quest adventures that I’ve enjoyed in the past. There is magic indeed in this exciting and adventure-filled debut novel. This young and promising author certainly managed to shake off my jaded attitude about fantasy, and I’m very glad that he did. I had a grand time reading his book. The Reach Between Worlds: The Arclight Saga, Book 1 is most highly recommended. 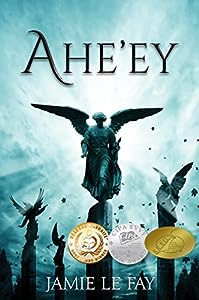 Ahe'ey by Jamie Le Fay is the complete collection of a series that takes place in a fantasy world segregated following a horrific war. Morgan is opinionated and strong-willed, speaking for empowerment and equality. When an event goes awry and her handsome guide saves her life, she discovers a secret other world. She doesn't believe him until another attack leads her to a magical world where women rule, and men are segregated. But with every ideal, there's a flaw. Her relationship with the dashing Gabriel becomes complicated as his role in this world is out of his control. The longer Morgan is in Ahe'ey, the more she examines her views on gender stereotypes, roles, race, and the long debate of nature versus nurture.

Jamie Le Fay calls everything out into the open, and asks the tough questions that force you to think. Morgan's voice is strong-willed, opinionated, stubborn, and clearly indicates the author's voice. Each of the characters has been scarred by fear and hatred, and is struggling to make sense of the world. Sky has come out of the war with a hatred of men, viewing them all the same as the vicious men that took her mother. Gabriel is trying to raise a better generation that can bring light to both worlds, and a sense of equality. Morgan is campaigning to break all stereotypes and bring empowerment to women above sexuality and gender. They're flawed, real, and honest characters that can be easily related to. Ahe'ey is the kind of novel society needs to read, to create inspiration and to make people think. Ahe'ey is daring, complex, and honest. A must-read novel that tackles heavy and real topics with a mix of serious and humorous, charm and tragedy.