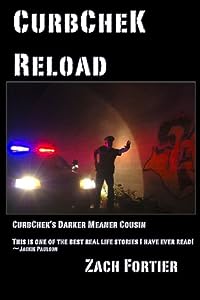 In this age of television, where even the most gruesome police drama ends with warm and fuzzies, Zach Fortier turns that notion on its head with his gritty and often dark glimpse into the life of a true crime fighter. CurbChek Reload is more than a disturbing post-mortem on a career that spanned several decades; it is a clinical and sometimes humorous look into the underbelly of society. The book is presented in small vignettes of his calls throughout the years and his interactions with other officers, informants, and the general public. This isn’t the story of one case that has stuck with Fortier over the years, but rather the everyday nuts and bolts of being an officer on the beat. Just like most lifelong police officers, Fortier displays the trademark egotism that is part and parcel of making life and death decisions.

CurbChek Reload is a true crime tale that is both gruesome, heartbreaking, and true to his law and order roots. Zach Fortier has but one primary emotion about all of this: anger. His anger is understandable, but the average civilian will not be able to read the crimes he’s worked without a healthy dose of sadness, disgust, and happiness that a guy like Fortier was there with his gallows humor to get the job done. He does a great job of simply “telling it like it is,” without a lot of sugarcoating or embellishments, because true crime is enough on its own with extra blood, guts, or victims. After reading this installment of CurbChek, those old episodes of Law & Order won’t be nearly as satisfying! 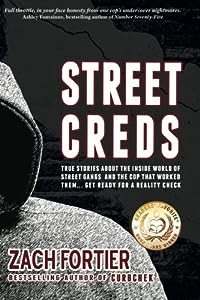 The world of a police detective isn’t as ‘fun’ or ‘simple’ as it may seem from the television shows most people know and love. You don’t always ‘get your man’ and you’re not always going to have clear photographic evidence or videos. You’re going to have to get out there and do some digging, do some hard work and Street Creds by Zach Fortier is definitely proof of that. A detective who isn’t afraid to get his hands dirty in the pursuit of criminals on the street, Fortier is willing and able to explain the ins and outs of being a detective and working with (and against) detectives who couldn’t care less about the results of the job.

Street Creds is about working the gang task force and managing to survive it. In larger cities it’s common for gangs to pop up and to practically rule the streets, but for the citizens only the police have a hope of saving them. This book shows that not all cops have the best interests of their citizens at heart. Many may be on the gang’s payroll and many others may simply be going through the motions every day, uncaring of what’s happening around them. Fortier has created a book that shows what really goes on behind the closed doors of a police station, and how corruption and greed are rampant everywhere. For him, this was personal and it became even more so as he suffered through the difficulty of being a good cop in a bad cop arena. 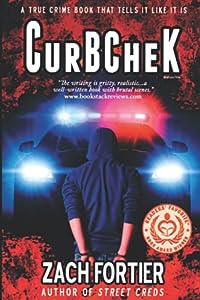 “CurbChek” by retired Police Officer Zach Fortier is a gritty, behind the scenes look at the day to day existence of a city patrol officer on night shift. This is fiction only in the sense that the geographic areas in which he worked are not identified, and names are changed to protect the innocent as well as the guilty. Officer Fortier relates some incredibly appalling situations in which he played a significant role and some loathsome situations where the good guys didn’t always win. His stories instilled in me a greater sense of respect for the men and women who put their lives, their marriages, and their personal relationships on the chopping block to serve and protect the innocent from become victims of those who would do them harm. Sadly, he also exposes the ugly underbelly of office politics hindering good, honest police officers from doing their jobs while under the direction of the egocentric wannabe “brass”. In that regard, the street cop faces the same brown-nosing, butt-kissing, back-stabbing, “good old boy” system and nepotism faced by most of the actual working class in this country, and perhaps other countries as well.

Zach Fortier has published four books in this same vein, but it would be wrong to call them “a series”. I can’t speak about the other three – yet – but “CurbChek” is flawlessly written and utterly fascinating. It is one of those rare books where, when you check the page number you are on, you are amazed at how far you have read since the last time you checked. These stories are nearly impossible to turn away from until you have read them all. Fortier has graphically and accurately portrayed night life in the inner city; a part of life nine-to-five suburbanites do not see, and may not believe. The author has presented an honest look at a slice of real life. You will do yourself a favor to read what he has written. 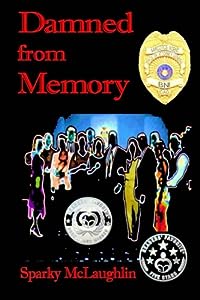 "Damned from Memory" is an explosive expose by former US narcotic agent Sparky McLaughlin who, according to him, has been a cop all his life. The first part of the book is his own personal story explaining how he developed a calling to become a cop and his first few years on the job in Philadelphia. In telling the rest of his story, we get to learn the flow of drugs from the streets and brings us all the way to the White House, the US State Department, and the CIA. It is disheartening to know that Washington politicians are willing to raise funds even from personalities who are linked to drug traffickers. And it is an ugly revelation that dedicated cops are punished, with their reputations soiled, when they want to get to the bottom of the narcotic problem in the US.

Harassed by the CIA in cahoots with international drug traffickers, McLaughlin painfully learns that honesty and dedication to his job as a narcotic agent will change the course of his life forever. His book "Damned from Memory" is a creative nonfiction that exposes one man's war against the narc-traffickers in the US and the reasons why it is impossible to win it. Face to face with powerful criminals working together with international drug traffickers, it becomes a matter of life and death. Sparky McLaughlin writes with frankness that shows his courage and dedication. His life reads like an action packed novel and sends a chilling message on why the US can never win the war against narc-traffickers. This is one of those books that keep the reader on his seat until the very last page. Written with zeal and conviction, it seems the author's pen can also be made as an effective weapon in this ongoing war. What makes the story more compelling is the fact that it is happening in real life. And what makes it scary is that it is still happening now.