The Shining Within Me

Communications from the Afterlife 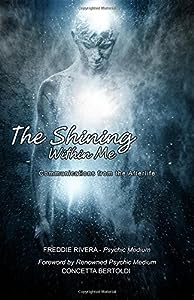 The Shining Within Me: Communications from the Afterlife is a spiritualist memoir written by Freddie Rivera. Rivera grew up sensing, hearing and even seeing presences as a young child. At first, he thought that this was something everyone experienced, but later he came to see his gifts as something to be hidden lest people think he was insane. School and later the army were very intense experiences for Rivera as he had to cope with the emotions of his peers as well as his own. It wasn't until Rivera was an adult that he realized that while everyone didn't share his gifts, many people did. He reached out to others cautiously at first, but soon found a warm and supportive community of psychics, mediums and spiritualists. Rivera also discusses how he reconciled his Christian faith with his spiritualistic abilities by acknowledging that those gifts came from God.

Freddie Rivera's spiritualist memoir, The Shining Within Me: Communications from the Afterlife is a fascinating and well-written real-life coming of age story. I especially enjoyed the chapters dealing with his early years in Spanish Harlem and his four years in the army. Rivera shines as he recounts the military experiences he had in Germany, the tropics and Alaska. He also gives a unique and incredibly moving account of his visit to Dachau. Without ever being preachy or didactic, Rivera discusses astral projection, lucid dreaming, evidential mediums (which Rivera is) and the difference between clairvoyance, clairsentience and clairaudience. He doesn't try to convince the reader of his gifts, rather he simply yet eloquently tells stories about his life and about those who he was able to comfort through his readings. I had a marvelous time reading The Shining Within Me: Communications from the Afterlife and learned a lot from it. It's highly recommended.

The 5 Star Points for Success 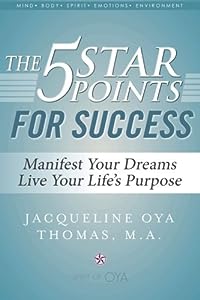 Do you often feel you are stuck in your life and wish you could make a difference for yourself? Then The 5 Star Points for Success by Jacqueline Oya Thomas might be just the right book for you. In this self-help book, you will learn how you can work on the five different areas that have an influence on your success and happiness. They are: mind, body, spirit, emotions and environment. The book explains why it is important that you work on all five star points, and gives you good instructions on what you can do to make a difference in each area.

I found The 5 Star Points for Success by Jacqueline Oya Thomas to be a really well-balanced book. It is not an incredibly long read, but that is a positive point. Many self-help books just go on and on and on without ever getting to the point. Jacqueline Oya Thomas has found a good balance of mixing her own experiences with helpful advice, and ideas on how the reader can turn their life around. Some readers might be quite surprised about how they need to put effort into something like their environment, when all they want is a better job or the love of their lives. This book shows how the different areas in your life are all tied together, and it does so in a good way. The book is definitely worth a read - either as your first book of that kind or as a quick refresher if you need some motivation to keep on track.