The Children of Twaalulilwa School 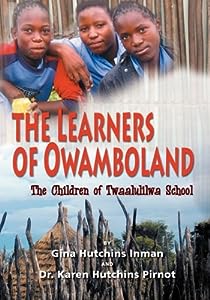 Readers' Favorite Gold Medal Award WinnerGina Hutchins Inman is a German-American citizen. In her desire to give to those less fortunate than herself, she traveled to Owamboland, Namibia, Africa where she spent 8 weeks with the children of the Twaahililwa School. She enjoyed the simplicity of their life. “The greatest impact of all was the realization that when you give to others, expecting nothing in return, the gifts which come back to you are abundant and lasting.” Inman did not know the language and knew little about the culture, but she willingly gave of herself. She found the people friendly and accepting.

There are 260 'learners' in the school. This book is filled with their photographs. Inman shares notes from the children with readers. The learners were eager to help out. When Inman became tired, they wanted to massage her legs.

Inman stayed with Meme Selma, the principal of the school and the Reverend of the church. Selma was instrumental in the rebuilding of the school after it was destroyed by war.

The photographs bring her experiences to life on the pages. She shares information about the culture: what they eat, how they wash their clothing and how they share with each other.

"The Learners of Owamboland" is a heartwarming book. We need more people like Gina Hutchins Inman, people that care enough about others to take risks.