How to Avoid its Perils and Make it Work 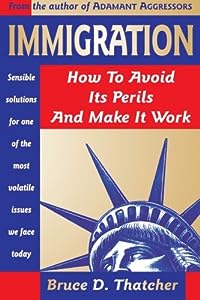 These days it is nearly impossible to talk about a controversial issue such as immigration without the conversation turning contentious. That is exactly why Bruce Thatcher’s "Immigration: How to Avoid Its Perils and Make It Work" is so refreshing. Instead of manipulating the facts to fit his narrative, Thatcher approaches the problems of immigration from a historical perspective so that the reader can see the flaws that actually exist rather than perceived flaws presented by those with an agenda. By laying out successful and unsuccessful immigration policies around the globe, this historical approach allows readers to form their own conclusions.

This well-written case study is rich with information of how many nations were settled by immigrants. Thatcher uses facts rather than fear, case studies rather than chaos, to illustrate the actual problems with unchecked immigration and the benefits of having a coherent immigration policy. The most compelling part of this book is that the author makes a very pragmatic argument that, fortunately or unfortunately, places very little emphasis on emotion, because the truth is that creating a successful immigration policy requires us to distinguish between legal immigration and illegal immigration. Bruce Thatcher has shone an intelligent light on the issue of immigration that should be required reading for all policy-makers, pundits and potential immigrants. With so many facts and case studies of immigration policies in the U.S., Mexico, Canada and around the world, I dare any immigration proponent or opponent to absorb Thatcher’s book without taking a long hard look at their opinions and the reasons for them. If we all take a sober look at the facts, as Thatcher has done, we just might come up with an immigration policy that works. 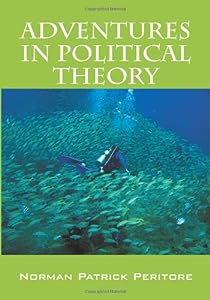 "Adventures in Political Theory" by Norman Peritore is a book which should probably be in every high school political theory class. It is a difficult read for the lay person who has little exposure to traditional political theory but is a gem for those wanting a comprehensive book in which the major political theories throughout the ages are presented in a coherent and fluid format.

The author takes the reader through the first-recorded Athenian philosophers and explains how citizens sought meaning and structure in their lives. He then shows how in Medieval times, there was a radical change from the noble ideas of Greek ethics which transformed societies by the use of more pragmatic control by wealth and political power. Then comes the era in which self-fulfilling property becomes the expectation, only to be followed by Marx's ideas of welfare and socialism. The author explains how the revolutionary ideas of communism and fascism set the stage for a more humanistic and participatory type of democracy. This political period is followed by the existentialist movement which then progresses to the postmodern type of political rhetoric in which moral relativism becomes a predominant political force. Lastly, the author introduces us to the ideas of evolutionary biology in which theories come from "empirically testable view of human natures" (both male and female).

We are introduced to the city of Recife, Brazil, in which a form of participatory democracy is now being tested. The model is not based upon ideology; rather, it is based on the fact that "citizens who pay the bills should be able to tell the government how to spend the money." Those already versed in the evolution of political theory will find this book readable and intriguing. Those just beginning the process of attempting to understand political theory will need to pay particular attention to the meanings of words in bold print as well as to the generous appendix which suggests additional readings for those intrigued by the evolutionary process of political theory.

The Monetarists and the Evolving Crisis

Wake Up, Americans; We Are Losing Our Great Nation 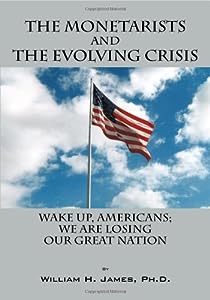 "The Monetarist and the Evolving Crisis: Wake Up, Americans: We Are Losing Our Great Nation" by William H. James, Ph.D. provides the definition of monetarism as a debt-based monetary and banking system which, in effect, can create money out of thin air. The focus of this book is the United States and its political and economic situation. James offers suggestions that will assist in changing the national growth, strength and supremacy. The United States was once a resilient nation. However, that has changed. We are at an all-time low “politically, economically, diplomatically, and geopolitically.” We are sinking in debt and our monetary system no longer works and neither does our banking system. We have done this to ourselves by pushing “export-oriented trade policies and exporting many of its domestic strategic capital assets to other nations.” Unemployment is at a high and the people are discouraged. James continues by discussing the effect of Monetarism on the Armed Forces and the political system. He stresses the need for strong leadership. In Part II James discusses a National Economic Development Bank among other topics.

Dr. James presents his ideas in a well-organized manner. It is obvious that he has spent much time researching and pondering on the current situations in the United States. James presents an in-depth look at the state of our country and offers solutions. It is very easy for most of us to pinpoint the problem areas but few of us can actually suggest ways to solve our problems. Dr. James writes in a bold, knowledgeable manner. This book has very important information in it for all Americans and should be read by citizens as well as politicians.

From Intake to Final determination 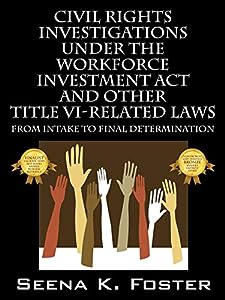 Discrimination is a very real problem in the work place but what can a person do? Seena K. Foster, author of "Civil Rights Investigations Under the Workforce Investment Act" leads the reader through the law, the process and the various scenarios of the subject. Citing law and providing examples of letters and check lists, information is outlined in concise and understandable terms. The subject matter is broken down into the simplest legal language possible considering the depth and complexity. Believable examples make sense of it all, guiding the reader step by step.

As anybody knows, legal reading can be dry and confusing. Admittedly, there were a few places I personally had to re-read but that would be attributed to my own lack of experience with the subject. I found the examples very useful and was able to utilize the bullet points and checklists to realize the meaning of it all. It was an eye-opening learning experience to read this book! I never realized how much is involved in filing such a suit, getting an investigation underway, working with both parties, and finding resolution. Businesses should consider having this book in their own library as a reference guide in their personnel department. This work could be used as a stand-alone in training sessions for employees and managements. The tremendous effort the author has put into "Civil Rights Investigations Under the Workforce Investment Act" is immediately evident. Nothing is left to question and, should there be any residual wonder, references can be looked up. Highly recommended! Author Peter Afrasiabi is an esteemed attorney who has witnessed many injustices, flaws and is frankly baffled by the differences between court systems. As a property attorney, things are cut and dried, equal and just. He sees the constitution being upheld as intended. When he trades to the immigration law arena, the regard for all that is true and fair goes by the wayside. Mr. Afrasiabi uses his own experiences -- true life case study -- to amplify the problem of property, a "thing", being protected better than human beings who are in harm's way. In a language that the common reader can understand, the author takes great strides to make the general public understand that there are holes in a system meant to protect and that something must be done to make it right. He uses Life, Liberty and Property as a solid platform to show us that our court system is somehow turned backward. In fact, our system will expend more energy saving a copyright than investigating the cause of an immigrant coming to our country illegally. Then, the same system that will bare its teeth to protect the ownership of say, a song, will deport the human back to a place where perhaps a death sentence awaits him due to crime or poverty.

I enjoyed this book very much as Peter Afrasiabi obviously writes from his heart, using his vast experience and own ethics as the guideline. He exposes the weakness of a system meant to protect. I applaud him for having the backbone to do so and sincerely wish him the best in all of his endeavors.

A story of Korea and the politics of injustice 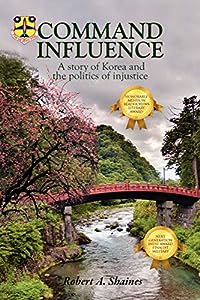 Command Influence is the memoirs of Robert A. Shaines, mostly covering the years he was a JAG officer in the Air Force. He shares his experiences in the Air Force and Korea; however, his main focus is on the trial of George C. Schreiber. Shaines was one of three defense attorneys when Schreiber was charged and convicted of premeditated murder.

Twenty-five year old Schreiber was a teacher in Illinois before joining the service. His was well-liked and his reputation was spotless. It was obvious to Shaines the man was not only innocent, he was also was the scapegoat to appease the Koreans and to further the career of some military officers.

Shaines supports his story with lots of documentation, quotes, photographs, and letters. Often he utilizes the transcript from the trial. This is a story that needed to be told, not only for the author's peace of mind, but to clear the name of Schreiber.

I have no doubt Schreiber is innocent. Mr. Shaines convinced me. The last part of this book was my favorite. Shaines' conversation with Schreiber's family was priceless. My suggestion for this book is to present the story as a fictional account of an actual event rather than a memoir. All in all I found this tale fascinating. This is a story that had to be told. I find that both Schreiber and Shaines are/were courageous men.