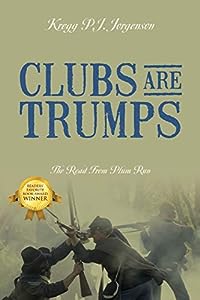 A young man named Bent comes from the farm fields of Minnesota and he survives the bloody battle of Gettysburg. Union Private Bent Nyhavn is the moral center of this epic tale. Kregg P.J. Jorgenson in Clubs Are Trumps: The Road From Plum Run writes 288 pages of action, adventure, bawdy fun, and heartbreaking loss. The motto of the Union Army's Second Corps is "clubs are trumps," which urges victory or at least survival. The men want the advantage on the battlefield as well as at the card table. Civil War armaments, from the fiery hit of a musket ball to the stab of a bayonet, cause pain and destruction. The small, brown bottle of laudanum may numb the physical pain but it won't heal the mental scars. After many more army duties, Nyhavn rides West to scout for railroad surveying.

Nyhavn and all the men of the Second Corps have a story to tell through their life, death, or injury. They fight with a heroic advance after the Third Corps runs back to the creek called Plum Run. Clubs Are Trumps is full of military and tactical description. The sight, sound, and smell of battle is graphic and sickening at times. The young private Nyhavn reacts to this sickening chaos in a brave way. He is kind when he can be and he is brutal when he must be. Plum Run is also named Bloody Run as heavy rain mixed with soldiers' blood. The winding plot, intricate settings, and multiple main characters make this book a bold achievement.