California, a serial killer on the loose targeting young prostitutes and one police officer and his K-9 ready to capture him and bring an end to his deadly reign. Who will be the victor in this suspense filled novel.

When young sisters, Teresa and Megan O'Connell, witness the murder of their mother at the hands of their own father, they were raised by their grandparents. Now, grown up, Teresa has a normal life while Megan suffers from agoraphobia. When her sister is murdered, all clues point to Megan. K-9 Officer Jack Davis was raised with the sisters and could not believe that Megan was a murderer. When he finds himself becoming attracted to Megan he finds himself struggling with his own desire and departmental codes. With several suspects, a psychopath that gets a thrill out of killing , a brother who is supposed to be dead, a lawyer, two strangers who seem to come out of nowhere to be around every crime scene, and disappear in a flash. Still the clues point to one person. Who is the actual killer and who will be the final victim? What secrets are each hiding. One Cop, One Serial Killer, One Witness. A Surprise Ending..

"Silent Partner" is a fast paced thriller that will keep the reader on the edge of their seat till they reach the amazing conclusion of the book. An excellent mystery that is clearly written with no bad language or sexual exploits which I prefer. If you like to read a good mystery that leads you to think you know who did it, but then find you`re wrong, then you won't want to miss reading Jennifer Chase's newest book "Silent Partner". Recommended highly.

The Lathe of God

A Quest for Noah's Ark The setting is post 9/11. Bio-terrorists have unleashed multiple viruses including anthrax, small pox, and a virus so evil that we can only begin to imagine the implications. RAPAIDS (a cross between the Parvovirus and AIDS virus) began by destroying livestock, causing a famine throughout the world. Then the unthinkable happened, it was passed from the livestock to the farmers. Within one year of contracting the disease, the victim was dead. Scientists are frantically working to find a cure. Could the solution lie in Noah’s Ark? Sightings of the Ark have come to light. Is it a myth or fact? Could God have placed an instrument on board (The Lathe of God) that can regenerate the Earth?

The scientists found the very idea of Noah’s Ark to be far fetched, few were believers. However, they knew that the citizens needed something to believe in, something to give them hope. A group formed to search for the Ark and save the world. They called themselves S.T.O.R.M. Science, Technology, Old Religion and Mythology. They researched all aspects of the story very carefully.

They began the journey to the summit with terrorists trying to stop them. Will they survive their search for the Lathe of God?

"The Lathe of God: the Quest For Noah’s Ark" is part sci-fi, part action adventure, and totally entertaining. When I first saw that this book was 621 pages long, I was a bit put off. But, once I started reading, I was hooked. The reader travels with the members of STORM through the dangers of mountain climbing, terrorist attacks and a struggle with all that they believe. The plot is well developed and leaves room for sequels. The characters are interesting.

A Margin of Error Lani Massey Brown offers readers a thriller. The setting is present day Florida. Cady Palmer is the Deputy Supervisor of Elections. A coworker commits voter fraud. As though the stress level isn’t high enough, the governor sends someone to “watch” everything that happens on Election Day.

A Margin of Error: Ballots of Straw is an edge of your seat thriller. The tension slowly builds to a point of no return. The next time you close the curtain on the voting booth, you push the buttons, will your vote go to the candidate of your choice? Lani Massey Brown is a talented author. A Margin of Error seemed a bit heavy in a few spots but all in all it is a good read.

Ready For The Defense 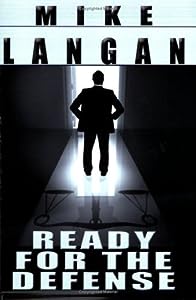 As I read this book I kept picturing a cross between Mike Connors as Mannix and Raymond Burr as Perry Mason. Grant you I know Mannix was a PI and not a lawyer yet he came to my mind and I know that Perry Mason was never a bumbler but he always saved his client by finding the real culprit.

Mac and Hank’s new client was Senator Victoria Serling. As they were discussing the case the Senator and Mac were hit by a car. In the midst of pursuit Hank had a car accident. All three ended up in the hospital. There is more to this mystery than meets the eye.

The plot for this book could have been ripped from the headlines. Political scandal, campaign smears, and attempted murder. What more could a diehard legal thriller fan want? In the tradition of our favorite old time TV lawyers, Hank Fisher is known for solving his cases in court. Mike Langan has character development down to a fine art. His writing style is flamboyant and over the top, which makes for exciting reading. Langan’s expertise adds to the legitimacy of this novel. This is the beginning of a new series; I suspect Hank Fisher to be around for a long time. 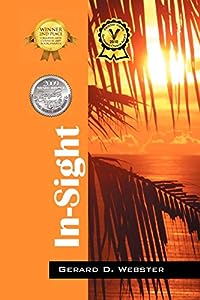 A large corporation planned to develop a resort complex on the tiny island of Tamaqua, off the coast of Florida. The resort would attract a lot of tourist and make someone a lot of money. The residents were offered an opportunity to sell their property; however, not all of them wanted to sell. They liked their homes and their lifestyles. Many retired military personnel populated the island. The corporation was not willing to take no for an answer.

In-Sight is an exciting read. I quickly turned the pages to see what would happen next. The lead characters were well-developed. The secondary characters led much to the plot. Do not let the dull cover of this book fool you. Inside awaits a great read. I’m hoping for a sequel.