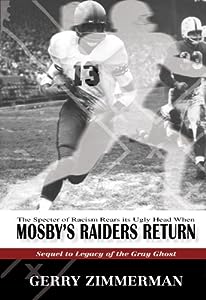 "Mosby’s Raiders Return" is a sequel to "Legacy of the Gray Ghost" and takes off right where the first book ends. 1958 was a great year for Willie Hairston. One accomplishment was becoming Mosby University’s first colored graduate. The other major success was coaching the Raiders football team to an unbelievable season. And, things are looking better for 1959 when Willie's son is born; he’s given a five year contract to coach the Raiders, and he and Sally are able to buy their first home. But, things are not all great. Since Mosby doesn’t offer athletic scholarships, their players are students first and players second. Graduation has taken a toll on his team and he is not sure how he is going to fill some awfully big shoes. With Willie’s graduation, school president Bob Howard is even more convinced that it is time for desegregation if they can find some quality colored students to offer academic scholarships. One of Willie’s assistant coaches remembers a player who once played for Oakmont but lost his scholarship. Willie decides to give him a chance and the first of the school’s colored players arrives at Mosby. The young man meets other colored students who have had previous football experience and they all decide to join the team. Suddenly things are a lot better for the Raiders. The season progresses and the annual showdown between Mosby and Oakmont is fast approaching. To the dismay of the players, fans, and coaches, Mosby’s top player is injured. Is Mosby doomed to go down to the high scoring Oakmont team? It looks that way until one of the coaches remembers a new radical offense he once saw. But, do the Raiders have the time and talent to learn a new offense with only a few days before the big game. Willie is willing to bet everything that they do.

Another winner for Gerry Zimmerman. What a great story! Old familiar characters and new exciting ones keep the reader waiting to see what happens next. This is not your typical football story, but a story of life, the beginning of a new age in sports and education. The writer has captured life on an all-male university as it should have been, funny and entertaining. Very nicely done.