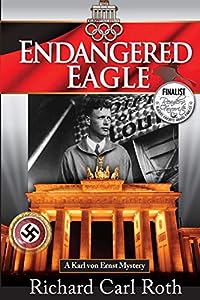 Endangered Eagle: A Karl von Ernst Mystery is a compelling work of historical fiction by writer Richard Carl Roth, set during a well-documented period in history. Berlin, 1936. Hitler and the Nazis have already instituted a reign of terror throughout Germany, but with Berlin about to host the Olympics, the Nazis are anxious to show the world a “New Germany.” Adding to the heightened excitement of the impending Olympics, it has been arranged that Charles Lindbergh – the first man to fly from New York to Paris – will visit Berlin during the Olympics as a special guest. Weeks prior to his visit, General Hermann Goering, Commander-in-Chief of the Luftwaffe, is advised of an assassination plot against the American hero. He gives Karl von Ernst, a former Chief Inspector in the Berlin police, the formidable task of identifying the mastermind behind the assassination plot and preventing at all costs what might otherwise be a public relations disaster for Hitler’s Germany.

Many books, both fiction and non-fiction, have been written dealing with, or set in, Nazi Germany and much of it has focused on the Holocaust – those who perished in it or managed to survive it. What is refreshing to see in Endangered Eagle is that although the setting for the book is during a time when the Nazis were already in power, the story focuses on the Berlin Olympics and the assassination plot of Charles Lindbergh. Both are story-worthy in their own right, but combining the two and setting them against a backdrop of Nazi Germany in 1936 and you’ve got the makings of one great story. Roth’s work is meticulously researched and lovingly scribed. The author does a bang-up job conveying time and place and his prose, although somewhat stilted, works perfectly in conveying German decorum and heightened paranoia throughout Berlin, thanks to the fear the Nazis have evoked in everyone. In this respect, Endangered Eagle sets the stage beautifully. The events as they unfold are compelling, heightening the intrigue before Roth throws his readers an unexpected curve ball near the end – making for a bang-up finish. For lovers of historical fiction dealing with the Nazi era or simply those who love intrigue, Endangered Eagle delivers on all fronts and is worth the read.