Prelude to a Legacy 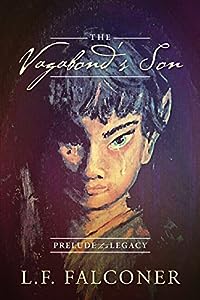 L.F. Falconer's The Vagabond's Son: Prelude to a Legacy tells the story of Adalanto and his adventures. The early years of his life were filled with darkness as he lost his mother before he could even remember memories about her. He grew up with a father who had done nothing but make his existence miserable. One day, after a violent confrontation, Adalanto was able to break free from his father. He ended up in a town called Alasdor and was soon taken in by Kenadoren and his family, despite the former's mysterious background. However, just when things were going well for him, things turned bad and he had to flee once more. Because of hopelessness brought about by being a vagabond's son, he tried to end his own life. By some divine intervention, Adalanto was stopped. A group of hunters stumbled upon him afterwards and thus began Adalanto's new adventures once again. From that time on, he was able to make great discoveries about himself and the entire kingdom.

There's as much to say as to feel about The Vagabond's Son: Prelude to A Legacy. L.F. Falconer created a very believable world and I was hooked. As I read my way through the chapters, the more I felt part of Adalanto's world. It also felt like I was actually there. I cried with him when things got rough. I cheered for him when things were on his side. My interest didn't wane right through to the end of the book. I even want to jump straight into the next novel.

In addition to that, I was impressed at how Falconer was able to introduce old social issues while coming up with a story of a magical world and its inhabitants. It may not seem like a good mix, but this one was fused harmoniously. Not only was I enjoying all of the adventure, it also made me think of how much these social issues can really affect some people in society. It made me realize that it still happens nowadays and that no matter how open or accepting we are now, there's still a lot of discrimination and judgement being thrown at everyone everywhere. After reading it, I noticed that I have become more cautious of my actions and perceptions toward others. Overall, The Vagabond's Son: Prelude to a Legacy is a must-read. This is one to watch out for.

Not Where I Wanna Be 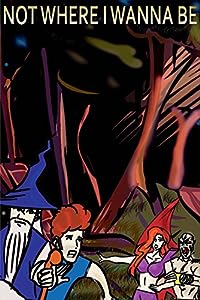 How much do layers of reality make up our experience of life? In Not Where I Wanna Be, the singer Sarantos travels to the magical land of Yarrowtopia, where he learns magic from a wise and ancient wizard called Wallis, who happens to have a weakness for pizza. Here he forms another band, with an elf on keyboards and a sword hero on drums - which has certain advantages for the band, as you shall see as the story progresses. He falls in love, battles vampires, and meets an interesting cast of magical characters along the way. On another level, though, the story's quest runs parallel with that of the author, who challenges his muse to weave a cohesive narrative across multiple medias of expression.

With the creation of Not Where I Wanna Be, Sarantos undertakes the daunting task of writing a chapter and producing a song with an accompanying music video for each monthly installment. If you love music, you may find it interesting to track down each musical interpretation as you begin a new chapter, to grasp the nuances of its emotional dimensions. To realize an experimental project of this nature through seat-of-your-pants improvisation can be a courageous undertaking and that deserves merit points for innovation, regardless of the outcome.

While Sarantos is by no means a Pratchett or a Tolkien, he puts himself on the line with this book. Here and there, the work shows the beginnings of some great world building skills, although I was a little disappointed that Charity the Octopus and the dreaded Captain Fear never showed again after the first chapter. A rematch between Sarantos and the evil pirate might have been fun. Expect a lightly romantic mash-up of pop music and sword and sorcery style high fantasy. The accompanying illustrations enhance the reading experience and, if you get lost, there is a very useful index of characters towards the back of the book. 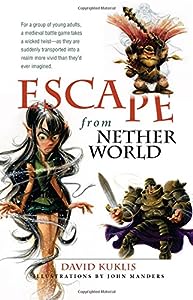 Escape from Netherworld is an epic fantasy work by author David Kuklis. The action centers on seven friends who enjoy a Dungeons and Dragons style role play game. Leading the pack are brothers Joe and Dave, who set off in full costume to conduct their latest game in a cave, where Dave has a romantic surprise in store for his best girl Kerri after the game. But the end of the game never arrives, as strange and supernatural circumstances transform the seven players, hurtling them into the very world they have always imagined entering. Here they become the characters for real and encounter all the wonders and dangers of epic fantasy game play for themselves.

Fans of RPG table games are sure to be sucked into the vivid description, technical details and plentiful in-references of Escape from Netherworld. There’s more than a hint of autobiographical influence from author David Kuklis who has clearly based plenty of the action on his own experiences, but I particularly enjoyed his balance of action, romance, humour and rather high-concept fantasy as the novel rolled along. It is also interesting to see the inner workings of the minds of RPG fans, in this case how the characters are actually tempted to stay in the fantasy realm rather than return to real life. Overall, I’d say that young adult and college age readers are sure to enjoy the twists and turns of the story, and older fans of D&D and similar games will likewise find Escape from Netherworld a compelling read. 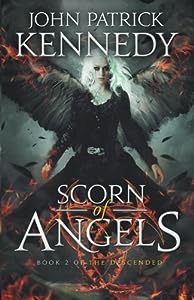 John Patrick Kennedy’s The Descended series continues with Book 2, Scorn of Angels. Nyx, Queen of Hell, lies broken and continually tormented in a box at the bottom of the Lake of Fire, put there by her lover, Tribunal, the Son of God. Nyx’s daughter has been slaughtered, and her companions were captured and are being tortured. Lucifer has taken over Hell and is ruling it with an iron fist. On Earth, Arcana, Angel of Heaven, has arrived a thousand years too late and is seeking answers.

The conflict between Heaven and Hell continues. Having read the first book, Plague of Angels, I’m keen to follow the story of Nyx and the Descended once again. Nyx never fails to fascinate me, as she is neither good nor evil. Her actions and decisions stand as a reminder of how complex she is. Tribunal is continuing his quest to destroy humanity with the aid of Lucifer and the Descended Angels.

Myth and religious elements are interwoven through Kennedy’s dark fantasy world. As this is a second installment, readers might want to read Book 1 to familiarize themselves with the world that Kennedy has created. It is important that the story is appreciated based on creativity and vigor of the writing, and is not to be taken literally as some sort of blasphemy. That said, readers who are sensitive to stories with warped religious themes might be offended with The Descended series. For others, the dark, original storyline, along with complex character development, will make Scorn of Angels a fascinating read.

The Secret of Mago Castle 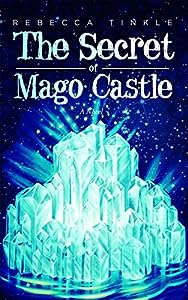 The Secret of Mago Castle is a metaphysical novel written by Rebecca Tinkle. Noah, Toby, Leuters and Angeline are looking for something, even if they don't know it. Noah is a doctor who's been diagnosed with a serious heart condition. Toby is in the stock market and has an ability that's made his life a prosperous, but meaningless one. Leuters has just been released from prison for the sin of finding and promoting a universal wellness product. Angeline is an actress who has not found her place and also has a secret skill. Noah's journey begins on the day before his heart surgery, when he walks into a lecture on life's spiritual significance, given by a woman named Suna. She informs him that she had been waiting for him, and their meeting would change his life.

Rebecca Tinkle's metaphysical fantasy, The Secret of Mago Castle, is an absorbing and uplifting story set in the red hills surrounding Sedona, Arizona. The author quickly introduces each of her characters and involves the reader in their stories. I was intrigued with the author's use of Korea's history in plotting this book, and found her presentation of the Korean creation myth to be marvelous and very inspirational. The Secret of Mago Castle gives you a lot to think about, even if you never visit Sedona or are inclined to meditation. Reading this book made me feel positive and empowered, and after reading it, I'm still feeling that way. I'm also eager to learn more about the Budoji and the history of ancient Korea. I enjoyed reading The Secret of Mago Castle. It's a marvelous story and is highly recommended.