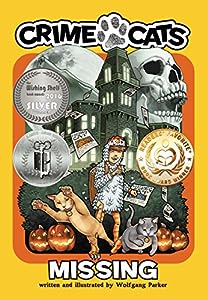 Missing is the first volume in the Crime Cats book series, written and illustrated by Wolfgang Parker. Young teen Jonas Shurmann works as a volunteer at his mother’s veterinary surgery. While he doesn’t mind helping out his mother, Jonas is certainly not a fan of cats. He believes cats are spoiled, treat humans abysmally, and have no manners. As he carries a feline patient into one of the consulting rooms, Jonas hears yelling. He pokes his head out and sees a man in the reception area, desperate to put a notice on their board regarding his newly missing cat. It isn’t until the notice is pinned to the board that Jonas realizes how many cats are actually missing, as the board is completely covered with notices from frantic owners. The following day, Jonas is bullied for a chicken costume his father had bought for him for the Halloween dress-up at school. During a scuffle on the way home, one of his school books is thrown into the yard of the neighborhood’s haunted mansion. As he tries to retrieve it, Jonas hears a voice nearby. When he looks up, Jonas is surprised to see the one-eyed cat, Neil Higgins, which he had been carrying to his mother’s consultation room the previous day. Neil tells Jonas to return at midnight and help investigate the feline disappearances, all of which point to the haunted house. When Jonas teams up with Neil Higgins and his investigative sidekick, CatBob, their investigations lead them directly to the haunted mansion, but nothing can possibly prepare them for the shocking secrets within.

Oddly enough, this book makes me nostalgic for my childhood, as the storyline is solid and it tells a great tale which holds the reader’s interest in its entirety. Wolfgang Parker’s tale of a bully victim who finds the superpower of being able to talk to and understand cats is unique, whilst being filled with both fun and drama. Jonas’ assumptions about cats are quite wrong, and he discovers how harrowing and endlessly dangerous life can be in a feline’s 'shoes.' While cats are not as strong as dogs, their agility enables them to escape danger by seeking out much higher ground. The lessons which Jonas learns from his feline friends enable him to safely rescue one particular cat which finds itself blinded after it is stuck with a bag on its head. Jonas’ determination to pursue the terrified animal as the bullies look on and laugh is fueled by his mysterious connection to his new found friends.

Missing is cleverly told, well thought out, and reminds me of the days of well-written children’s stories by Enid Blyton. I foresee Wolfgang Parker’s Crime Cats series being on home bookshelves for years to come, and feel that this book would be enjoyed by readers of all ages, as it contains all of the essential ingredients of an epic story: drama, despair, tragedy, humility, action, adventure, fun and a decent dose of aptly paced humor. 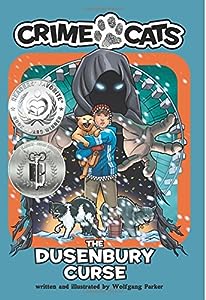 The Dusenbury Curse is the second adventure book in the Crime Cats series, written and illustrated by Wolfgang Parker. Eight-year-old Jonas Shurmann has a special gift: he can converse with cats. As Orville Dusenbury agrees to board two superheroes, CatBob and Neil Higgins, at the Dusenbury Mansion, things start to go awry. Orville is not happy that he constantly has to clean up CatBob’s pee, but little does he realize that the feline is marking the Dusenbury Mansion to keep it safe from the evil forces at work in the form of the White Phantom and the Phoenix. When CatBob is found unconscious on the streets by Jonas, Jonas and Orville make their way to the old amusement park nearby, but what they find chills them to the very core.

Wolfgang Parker’s incredible tale of deceit, mystery and action is perfectly balanced in this second installment of the Crime Cats series. Each of the character plots is clearly set out, showing their relationship to all the others in the story. I could not help but chuckle each time new cats heard Jonas speak for the very first time, utterly shocked and in disbelief that any human could understand them, let alone be understood. The curse, which goes back over 100 years, is well-written and quite believable, not to mention hysterically funny in all the right places. As evidence of the curse unravels, the reader is also taken on an educated journey about felines, their behavior and beliefs, and how they interact with humans. Not only does The Dusenbury Curse deal with humor, love, hatred and superstitions, but it also teaches some valuable lessons about trust. I very much enjoyed Wolfgang Parker’s delightful tale, and recommend The Dusenbury Curse to readers aged 7-12 who enjoy their adventurous animal tales of mystery and intrigue with a side order of pure hilarity. 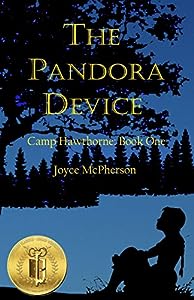 The Pandora Device: Camp Hawthorne, Book One is a children’s science fiction story by Joyce McPherson. Sixth grader Stella Harski, who lives with her grandmother, gets the opportunity to go to Camp Hawthorne, the same camp her parents attended. She hopes to find information about them while there, but receives an anonymous note telling her not to do so. Camp Hawthorne accepts kids who are gifted with telepathy and other superpowers, but Stella doesn’t know if she has powers. When mysterious things occur and a historic site is vandalized, Stella and her camp-mates realize someone is searching for a specific item. Stella tries to heed the warnings of an old woman, but finds herself becoming more immersed in a mystery that merges the past and future together.

Joyce McPherson’s novel, The Pandora Device, is a fascinating story for children as well as adults. It is the first in the Camp Hawthorne series and is an engaging science fiction and adventure book. The plot is very interesting and educational because the author based it on famous authors: Nathaniel Hawthorne, Mark Twain, Henry Longfellow and Louisa May Alcott. She included verses from a couple of their books that are now on my reading list. I think the story is original and like the mind reading skills, visions and other skills the young campers possess. There is strong character development, good dialogue and continuous adventure. The Camp Hawthorne series has caught my attention and I’m sure readers will also like these lovely books from Joyce McPherson.

The Secret of Bald Rock Island 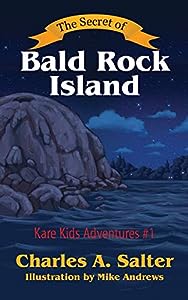 The Secret of Bald Rock Island (Kare Kids Adventure #1) by Charles A. Salter is an exciting children's adventure about a young girl determined to solve the mystery of her father's disappearance. Ten-year-old Kelcie Oglethorpe has always been curious and ready for adventure. Mr. Bartelby, the town's well-known and much-loved writer, is always willing to tell the children a story. When Mr. Bartelby tells the children of a mysterious creature that inhabits Bald Rock, Kelcie decides that it is time to solve the peculiar puzzle concerning her father's disappearance and discover if Mr. Bartelby's extraordinary story holds truth. Doing some research, Kelcie finds little to help her solve her dad's disappearance until she reads an article written by Mr. Bartelby. As things start to come together in Kelcie's head, she realizes what she must do. Only, she has been warned that it could be too dangerous. Can Kelcie solve the mystery of the strange creature and find her father? Will her determination prove to be deadly?

The Secret of Bald Rock Island (Kare Kids Adventure #1) by Charles A. Salter is a children's mystery story taking place on a small Maine island. I enjoyed reading this story and, although it is short, it is well thought out. The characters are entertaining, and the storyline isn't overly complicated. With a good portion of the inhabitants being of Scottish descent, this book is also educational. I believe that this book is perfect for the child just beginning to read chapter books as it isn't too long, and contains easily understood concepts. It is a well-rounded mystery with intriguing characters and a fascinating monster. Being the first story in a series, it will be interesting to see what other mysteries happen on Bald Rock Island in the next story. I would recommend this book to children aged eight to ten.

A Magical Story of Transformation 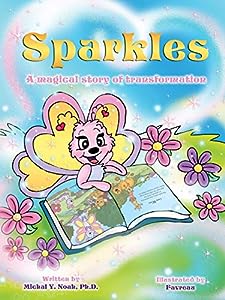 Life for Sparkles had many stages as it does for everyone. Sparkles hatched from her egg as a caterpillar, ate leaves, built a cocoon, and then woke up from a deep sleep as a beautiful butterfly. Life didn’t begin the way Sparkles thought it should begin. You see, Sparkles wanted to be something better than a caterpillar, something more beautiful, more special. In the egg, Sparkles felt cramped and wanted to escape. As a caterpillar, Sparkles felt restricted in her ability to move freely. She wanted to fly high in the sky and see the world in all its splendor from above. When she emerged from her cocoon, she felt vibrant, beautiful, and capable of doing just about anything. There was a great sense of power in her new found sense of self esteem. And this colorfully illustrated picture book is Sparkles’ story, one that demonstrates the power of believing in oneself, the power of believing that everyone is special and beautiful.

In Sparkles: A Magical Story of Transformation, Michal Y. Noah and illustrator, Favreau, have given us a delightful and beautifully illustrated story about a little butterfly that has so much to teach all of us. Told in rhyme, the lessons Sparkles teaches us are important: primarily that there is the potential in all of us to be anything we want to be and much, much more. Like Sparkles, we all have the ability to be great, to be beautiful, to be special. As Sparkles concludes her story, she says, “Each one of us is special. Through my story, you now know there is magic within you, too. Just let your inner light glow.” Let the inner magic glow from within – this is a powerful message, not only for young readers, but also for people of all ages.