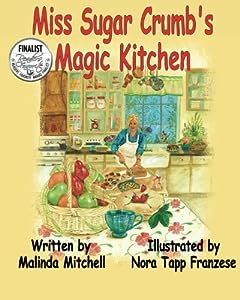 "Miss Sugar Crumb’s Magic Kitchen" by Malinda Mitchel is an adorable tale for ages 9-12. Miss Sugar Crumb is a very nice young lady who enjoys doing things for others and never expects anything in return. She loved to bake pies, cakes, and homemade bread. Her favorite thing to bake was pies. She loved to give them away, and when she did, magical things always seemed to happen after the people ate them. She also enjoyed talking to animals that lived close by. When the animals ate her magical food they could talk. The animals ask for her help against the hunters that would sneak into the woods early in the morning. Miss Crumb would think of people and their desires and then set about to magically meet their needs.

Author Malinda Mitchell offers readers a delightful tale. I shared this book with my 11 year old granddaughter and she loved it. Her favorite part was the talking animals. She loved the way the hunters were scared out of the woods. Ms Mitchell’s story is will appeal to children in 4th-6th grades, and will challenge them without overwhelming them. The illustrations by Nora Tapp Franzese are wonderful and sure to grab the attention of the readers. Ms Mitchel and Ms Franzese make quite a team and have created a great plot with great art work in a a book you do not want to miss. 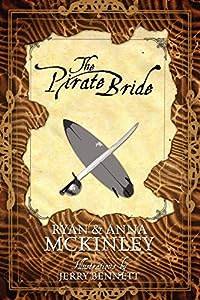 The Pirate Bride is an intriguing story about Rachel, a 13-year-old who expresses disappointment in going on vacation with her family until her Mom and Dad surprise of her with a surf instructor to help her learn to surf. Rachel is very excited because surfing is her favorite sport, and she has wanted to surf for quite a while. When the family arrives at their vacation spot, Rachel is anxious to begin her surfing lessons. While she is on her surfboard, Rachel really shows the instructor how good she is until distracted, she falls off the surfboard. Rachel goes underwater and then is helped by men she thinks are rescuers. The plot thickens as she thinks this is a dream, but then she asks one of the men what year is it, and his response is 1717.

This story is an adventure on top of more adventure. I enjoyed reading about Rachel and the men who rescue her from the ocean. Rachel expresses the emotions of being lost at sea as a mature thinking adult. The actions of the men run between being just plain mean to opening and accepting of this young girl whom they have named a Sea Witch. Rachel had to earn the trust of one of the men and had to be firm in tone and gesture to get him to allow her to be the person the men needed to help them continue on their journey. She decides that being without her family is the only concern she has until she can get back with them.

I really enjoyed this adventure book. I was able to imagine myself being in the story, giving me the feeling of being on the boat, actually lost at sea. In the end, this is a story about family. When Rachel came back from her adventure she realized there is nothing or no one who can replace the feeling of being with your family.

Cecile and The Treasures of Belamor 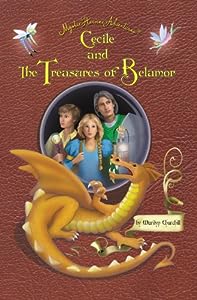 Cecile and The Treasures of Belamor by Marilyn F. Churchill offers children a delightful fairy tale. I was quickly reminded of the fairy tales I grew up with, tales of dragons that breathed fire, knights in their shining armor, unicorns with horns that sparkled, and fairies that flittered through the air. In Churchill's latest tome children will meet a dragon named Melchor.

Belamor Castle was experiencing earthquakes. The cost to repair the castle was quickly draining the treasury. A King has offered his support if the Princess will marry him when she becomes sixteen. Princess Cecile finds a trap door leading to the caves under Belamor Castle. Melchor the dragon is waking up after sleeping for five hundred years. Cecile and her friends must decide whether to put the dragon back to sleep or grant him freedom.

I love this series! Churchill set the bar high with her first book, Cecile and The Spider Queen. With her latest book, Cecile and The Treasures of Belamor, she not only met the mark, but surpassed it. The illustrations are superb and add much to the text. There are lessons to be learned from this book: 1) draw on your own strength and do not always depend on someone else to solve your problems; 2) place the well being of others first. This book was written for nine- to twelve-year-olds; however, I enjoyed it very much. I would consider this book a low reading level/high interest. It could be used with the Reading Coach System to promote reading and increase reading levels. I look forward to Churchill's next book.

The Summer of the Crows 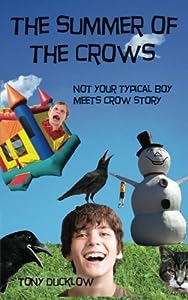 Tucker and his friends, Crandal, Scotty, Benny and Josh, were looking forward to their annual School Is Out For The Summer sleep over. Tucker had a copy of the new video game, Revenge of the Rabid Leprechauns! The plan was to stay up most of the night fighting the Ninja Munchkins, Insane Robot Assassins and the Zombie Carp. Things got a bit out of hand at the party, and the boys (all but Crandal) were grounded from all electronic devices until September. The adventures grew as they found other things to do during summer vacation: took a ride in a flying castle, rescued simps from Evil Caesar, camped out in a field, went fishing, and told ghost stories around a camp fire. What began as the worse summer ever, quickly became the best summer ever. This summer made him realize he didn't want to build his life around any game.

Tony Ducklow offers children and parents a look at life without electronic devices such as video games, cell phones, television, and computers. We adults grew up playing on tire swing's; children have pasty colored skin from staying in the house and are missing out on fun things like a club house, playing ball, making mud pies, etc.

Ducklow recognizes the importance of being a child, playing outside and exploring nature. He is very careful not to say that video games should be eliminated, but that they should be limited. He has created characters that will appeal to 4th-6th graders. Tucker, Crandal, Scotty, Benny, Josh and Maddy are very realistic. Ducklow knows just what appeals to children; the antics of the gang are exciting and surprising. I like the way he included the police officers, proving that they are friendly, helpful and not out to get someone. The emotions the children go through were lifelike: anger, jealousy, hurt, and pleasure. I will be watching for more books by this author.

The Above All Others Principle 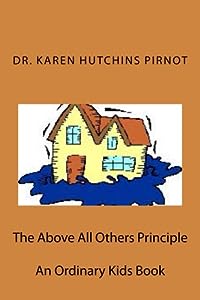 Eight year old Allie was swept away during a flash flood. The spunky little girl kept her head by remembering things her grandfather had told her. She thought through her situation and kept her head. "Clear headed action" was what he always said. Plan A formed in her mind and would have to do until plan B made itself known. She grabbed a passing piece of wood, "Big Red," and held on for her dear life. When she saw a small blue bundle and realized what it was, she grabbed it and would not let go. When the waters calmed enough so that she could walk, she realized she had traveled a long way from home. Allie's mother Abigail had rushed her son Peter to the hospital for safety. Peter had been injured in an accident 3 years previously and was left a quadriplegic. He had come to accept his life as a cognitive. A large part of his recovery was thanks to his sister Allie. She was a remarkable little girl. Peter knew she would survive, and yet there were moments of doubt as he and his mother waited five long nights and six days for news concerning Allie.

There is so much I want to tell you about this book. However, that wouldn't be fair. You'll just have to read it for yourself. This book is considered for 4th-6th graders, and it is perfectly appropriate for that age group. I hope adults will also enjoy this book. I certainly did. Karen Pirnot is one of my favorite children's authors. Dr. Pirnot is a Licensed Clinical Psychologist; she has spent most of her career working with juveniles. Dr. Pirnot has a gift for encouraging, building up and offering hope. She has written several award winning books. "The Above All Others Principle" is the sequel to "Peter, the Pole and the Knob". She plans to write a series of books featuring Allie and Peter. The fact that Dr. Pirnot cares deeply for children shines through her books. She has also published several books with her grandchildren. Pirnot's characterization is one of her strong points. Her books show triumph through adversity. Dr. Pirnot, you did it again,you made me cry. Your books are always heartwarming and heart wrenching. Thank you Dr. Pirnot for teaching all of us "The Above All Others Principle".