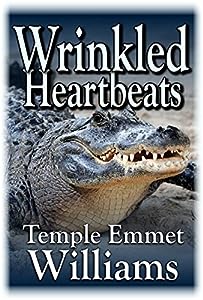 Wrinkled Heartbeats: A Novel by Temple Emmet Williams is a thrilling read. Captain George McKlane is a war hero. He recently lost his wife Agnes, and his son is trying to persuade him to sell up. George calls in Martha Krumble, a real estate broker, and Anthony Silburg, owner of a real estate agency, to price his home. Silburg isn’t who he seems to be though, and before George knows it he is deep in a sticky web of lies, money laundering and the deadliest of secrets, including a very painful method of making someone disappear in the Everglades. When he gets an offer on his house, he doesn’t realize that the offer includes ending his life and there is only one person who can save him – the person who has been hired to kill him. Will the military connection come through or will McKlane’s final battle be the last one?

Wrinkled Heartbeats: A Novel by Temple Emmet Williams is a true thriller from start to finish. It moves at a steady pace but it always moves forward. Flashbacks to the war provide lots of background information, which really beefs the story up and makes it easier to understand. I was a bit nonplussed by the way the book was written in the present tense to start with, but it soon became clear that this is the only way this book could have been written. It pushes you right into the thick of it and really makes you feel as though it’s happening right then as you read it. The plot was exceptional and the character development was second to none. As you read, you learn more and more about the characters and about how they all fit into the finale. I promise that anyone who reads this is not going to be disappointed in the slightest. Fantastic book, I really enjoyed it.