A Romantic Suspense Thriller (Tip of the Spear Book 2) 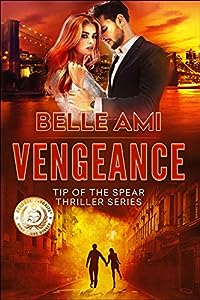 Vengeance: A Romantic Suspense Thriller is book two in the Tip of the Spear series by Belle Ami. It is an intriguing, beguiling tale that begs for superlatives to qualify it. A well-plotted and beautifully written story that features terrorists, a powerful Mossad agent, and the FBI, but what does Layla Wallace Hassani have to do with it all? When his wife is captured by terrorists in a restaurant bombing in Manhattan, Mossad agent Cyrus Hassani vows to rescue her. He is aware that the capture of his wife is a bait to lure him into the lion’s den, but there is more than his desire to rescue his wife; he driven by the need for revenge. He is the only one who can stop the Iranian terrorists from unleashing a bomb that can cause millions of deaths. But there is something he doesn’t know, which his wife knows, of course. Rescuing his wife could mean the death of their beloved child. She will have to choose to save their child or to sacrifice the child for the husband.

The very premise of this novel is powerful and intriguing enough to get the reader interested, and it doesn’t end there because Belle Ami introduces wonderful literary elements into her writing and builds a plot that is filled with surprising turns. Her characters are gorgeous, well-imagined, and constructed with the kind of mastery that places her in the ranks of authoritative authors like James Patterson. I enjoyed the intrigue, the pacing, the cunning plot, and the compelling characters. It would take another review to comment about the strength of the setting — both physical and political. Vengeance: A Romantic Suspense Thriller is riveting, an action-packed novel that creates the kind of tension readers need when they encounter such characters. Simply brilliant.