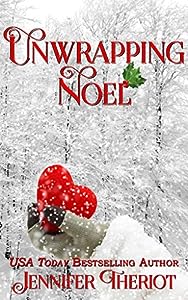 Unwrapping Noel by Jennifer Theriot is a romance novel about Noel, a public relations expert juggling her personal life and career. After suspecting her husband of infidelity, she files for divorce. A year later, she is still living with the man she divorced, due to feelings of guilt once she finds out that her ex-husband is stricken by testicular cancer. From that moment, her life is placed on hold. Later, through a series of events, a secret withheld by her ex-husband sends her emotions into a frenzy and starts her on a new path.

The novel starts off with a bit of action as Noel ponders on the events of the last year, involving her divorce and reason for choosing to live with her ex-husband. He's been stricken with cancer and she feels it's her duty to remain by his side. I felt for Noel. In my opinion, she felt it would be inhumane to abandon anyone during a critical time. In the back of my mind, I hoped Dave would see her compassion and ultimately change. His unprecedented office exploit was rather surprising. I love how the author didn't reveal the act until Noel was staring at the humiliation. One again I thought she would go into an emotional frenzy. The fact that she held her peace, to a degree, showed strength and character. As the story continued, she travelled far away and became swept off her feet by Leon, the Adonis type.

The story, even though romantic, had just the right amount of drama. Whenever an author balances romance with other themes, it creates a powerful climactic read. For those who enjoy romance sizzlers with just the right amount of drama, I recommend picking up a copy of Unwrapping Noel by Jennifer Theriot. You will not be disappointed. Maybe a little shocked, but not too much.