The Tides of Avarice 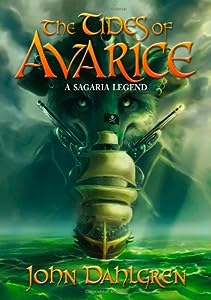 "Tides of Avarice" by John Dahlgren is a quirky, swashbuckling, original combination of pirates, treasure maps and lemmings. Sylvester Lemmington is our hero: a timid, serious lemming who works as a translator for the head archivist at the library. The love interest is Viola, a pretty, feisty lemmingess who merrily leads Sylvester into trouble, along with his treasure map. Add a missing father, Jasper, who took part in the last great lemming Exodus, from which mysteriously none returned many years ago, a whole host more slightly off-the-wall characters, plus of course an original plot, and you have a very entertaining, enjoyable book in your hands. There is plenty of skulduggery going on, and not just from the pirates. The lemmings and other animals share all our human characteristics, including the less wholesome ones so that there is a layer of social commentary buried in the humour.

I read this with my ten year old - neither of us quite in the intended YA audience - but it is hard to say which of us enjoyed it more. I could pick up some of the humorous subtleties of the writing that he missed but he could clearly imagine every single scene going on in his own head. We were both hooked. Dahlgren, a Scandinavian by birth, has an incredible mastery of language and is a very, very clever, creative writer. The story twists and turns, with enough of the extreme and ridiculous to keep youngsters engrossed and adults chuckling. It is refreshing and ingenious – it’s brilliant!