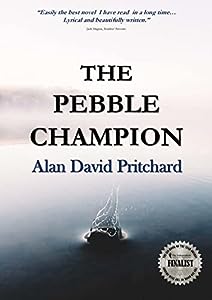 A.D. Pritchard’s young adult novel, The Pebble Champion, tells the poignant story of fifteen-year-old Chris in the aftermath of surviving the car crash that killed his mother. Sent by Auntie Wendy to live on the Isle of Wight with the father he has never known, Chris takes solace in walks on the beach and an imaginary world where he becomes the pebble hopping champion. But Chris is wracked with grief and confusion that he was to blame for his mother’s death. Hiding his pain from new friends, Thane, Deidre and Evelyn, and his father hinders his healing and relationships. Is his hopelessness and bewilderment at life, love and relationships a normal teenage challenge or is he really condemned (by himself) to an existence of misery?

The Pebble Champion is beautifully and sensitively written and I very much enjoyed reading it. Author A.D. Pritchard really gets inside the minds and emotional states of his characters and conveys this to his readers perceptively and brilliantly. With believable characters, this is a well-structured story with lots of depth and pace, and I found it a page-turner from start to finish. I especially like the method of using flashbacks to very gradually reveal Chris’s past and the build up to the tragic accident. This is more than a story of one boy dealing with profound loss and grief; it is also very much about growing up/coming of age, finding who you really are, your talents, and allowing yourself to be that person. I feel the author captures Chris's inner world perfectly and with empathy - his anger, heartfelt guilt and despair, and fear of further losses.

The imagined “pebble hopping championships” mirror Chris’s real life growing ability to let go of the past as he slowly builds the emotional skills to begin to do this. Chris grows through his pain and eventually realizes that he must also be true to himself to be happy. I liked his friend Evelyn’s gift of an acorn and wise words that no matter how much it may wish to be an apple tree, “it will always be an acorn” (oak). So The Pebble Champion is a story about grief and guilt, empathy and self-compassion/acceptance. As such I’d especially recommend it to teenagers, particularly those struggling with loss, personal identity or other growing up issues. An author and book you'll be glad you discovered.