The Girl in the Blue Tie-Dye Shirt 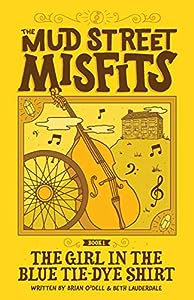 The Girl in the Blue Tie-Dye Shirt: A Mud Street Misfits Adventure is a paranormal adventure novel for preteens written by Brian O'Dell and Beth Lauderdale. What should have been an awesome after-school listening experience suddenly turned into something strange and frightening for Liam. Connor’s newest vinyl acquisition, a mint condition Allman Brothers album -- and not just any album, Eat a Peach -- was the epitome of Southern rock and definitely a treat to listen to. But as Liam relaxed on the living room floor of Connor’s home with the album jacket in his hands, something totally unexpected happened. He found himself in a strange, smoke-filled and funky-smelling bedroom, and he saw a girl in a blue tie-dye shirt kneeling there and crying. It was a huge relief when he found himself once again in Connor’s living room, but any interest in listening to the record had vanished after seeing that girl. Did that vision or whatever it was have anything to do with the biking mishap that left him with stitches on his temple and a raging headache? Liam had no idea, but soon he realized that he had to solve the mystery behind her continued appearances. Fortunately, his friends were ready and willing to help him do just that.