The Chest of Visions 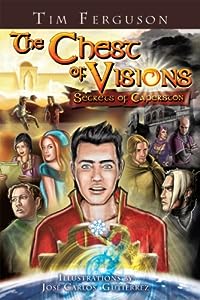 "The Chest of Visions: Secrets of Caperston" by Tim Ferguson is the story of Caperston as told by Mattpaul. Caperston is a planet much smaller than our own and its sun is much smaller than ours. Time is measured by generations that pass rather than years. Their ability to communicate with us is due to Strings technology. Ferguson has chosen the perfect format for this tale. The text reads much like email messages. Each one is dated. On May 2, Mattpaul shares information about Chihaysu. The man told the people about God who oversees the world, treats everyone equally and hears when people pray to him. Chihaysu also told the people stories like the one about a man who needed help, but many people would not stop. Rumors were circulating that Chihaysu prayed for a little girl and she was healed. I found it heartwarming that as Mattpaul shared information about Chihaysu, the Earthlings reading Tim’s blog began to ask questions. Those familiar with scripture and with the life of Jesus Christ will quickly see the parallel between Jesus and Chihaysu.

I find the plot of this book very realistic, for God is bigger than my imagination and who am I to say he did not place life on other planets? Ferguson deftly demonstrates how one person can share the word of God with another and it spreads like dandelions. One seed creates a plant with a thousand seeds and each seed creates another plant with another thousand seeds. This story was written for young adults; however, I enjoyed it very much. Tim Ferguson is very creative and has found a wonderful way to reach youth. Appendix I explains String Theory. Appendix II shares the options for using this book with a youth group and Appendix III shares 8 lessons that correspond with the chapters. I can easily see this book as Sunday School literature or Youth Group literature. Mattpaul has written it in a simple easy to read and understand easily. Ferguson’s light shines in this book. I look forward to more books by Tim Ferguson.