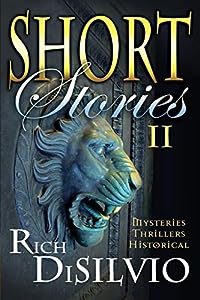 Short Stories II by Rich DiSilvio is an eclectic collection of tales ranging from the Roman era to the 19th century right up to the modern day. It includes short stories featuring Armand Arnolfini, a high-powered private detective with CIA connections who specializes in art theft and forgery cases. These are followed by the story of a man who appears in court due to a traffic offence, with a surprising twist - a tale so realistic one wonders if it is based on the author’s personal experiences. Next is a harrowing story of a man who, after a road accident, is fully conscious but unable to move a muscle or communicate with his doctors or family in any way, after which follows an intriguing, thought-provoking tale of a Korean war aviator. The collection concludes with four historical vignettes or dramatizations where the founder of the FBI, the Roman Emperor Augustus, Guglielmo Marconi, President Roosevelt and Winston Churchill all make an appearance.

I thoroughly enjoyed the selection of Rich DiSilvio’s works which have been collected in Short Stories II. Well-written with a cast of extraordinary characters, it is a book that you will dip into time and again. A fine collection of tales with many twists and turns, surprising and informative revelations and passages that will make you pause to think. Filled with good dinner party anecdotes, this collection ensures that you will not fail to be enthralled by Mr DiSilvio’s story telling and penmanship. This is my first encounter with this author’s work but I will certainly make a point of looking out for his books in the future.