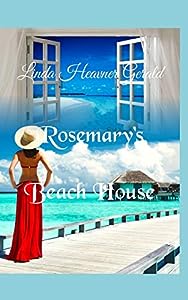 How much pain can one woman’s heart endure? In Rosemary's Beach House by Linda Heavner Gerald, Rosemary Lewis divorces her cheating husband and suffers through depression. To cope, she becomes a workaholic, focusing on her career as a Registered Nurse. When she meets Malcolm Beach, it is like a dream come true, because he has everything any woman could want in a man. She is adored by her new husband, a man with whom she shares almost everything, including sailing, which delights her. But then Malcolm suddenly dies, a tragedy that hits her to the very core. But this isn’t the worst of her troubles for a terrible enemy is poised against her. Does she have what it takes to protect herself? Is there enough fight in her to survive an enemy as vicious as what is heading towards her?

Rosemary's Beach House is a story of the heart, a narrative that looks deeply at the human heart. The protagonist is a well-developed character, a woman who has experienced heartbreak and loss, and the reader is keen to find out how she rebuilds herself after every heartache. As I read this novel, I couldn’t help but wonder if human life is designed to be characterized by pain with just occasional moments of happiness. The statement that “happiness was an occasional episode in the general drama of pain” can be said of this protagonist. The story is told in a compelling narrative voice and the internal conflict is deftly handled and used to add depth to the character development. This is a very engaging and interesting read, filled with humanity and realism.