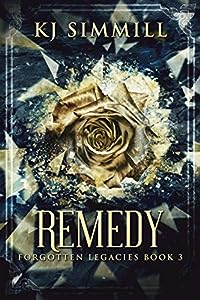 Remedy is the third book in The Forgotten Legacies Series by K.J. Simmill, an epic tale that plunges the reader into a world of magic with hints of mythology. This is a story that follows the quest of an adventurer into the sealed and forgotten realm, into The Depths of Acheron. But he can’t get what he wants from this world without giving to the banished what they claim to be rightfully theirs. The reader is introduced to a cast of powerful characters, a world on the brink of perdition, and one who wants to manipulate the powers that be to make the future his own.

I loved the level of conflict in this novel and its originality. The author creates worlds that are in conflict with each other and concepts that will excite the minds of readers. As one reads on, there is that tingling feeling that something huge could happen at any moment, and a lot of things do happen, dramatic and breathtaking. The conflict is monumental and it drives the plot, making it move forward from unexpected angles. It takes a lot of skill to write about an imaginary setting and make it feel like some place readers are familiar with, and K.J. Simmill seems to have this skill. The writing is beautiful, punctuated by compelling dialogues, streams of consciousness that explore the internal conflict in characters, and vivid descriptions of the setting, scenes, and characters. Remedy is an entertaining story with a spell that will continue to haunt readers after they are done reading.