The Migrant, Soldier, and Agent 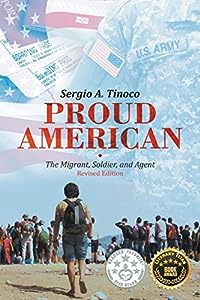 Reviewed By Robert A. Groves for Readers' Favorite

Proud American: The Migrant, Soldier, and Agent by Sergio Tinoco is a first-person account of three distinct phases of the author’s life. Beginning his senior year in high school, Sergio realizes he wants to be the one to break the cycle of migrant work his family has used for multiple generations to provide their sole means of support. He has bigger dreams for himself and enlists in the United States Army as a vehicle to finally break that cycle. His active duty years encompass the period the nation was involved in Bosnia-Herzegovina. His telling of the horrors he experienced during a deployment there is breathtaking. Following the deployment, Sergio demonstrates remarkable resiliency in battling PTSD symptoms. But, Tinoco’s service to the nation does not end with the military. Perhaps his most important contribution, and one that has the most positive impact, is his years of service with the Border Patrol as an agent on the southern border. Being of Mexican descent, he can relate to immigrants without apology.

Sergio Tinoco’s Proud American: The Migrant, Soldier, and Agent is a story for the present when the topic of immigration is a hot button issue. Sergio’s story is one of the best American dream tales I’ve read. His perseverance to make a better life for himself warms the heart. One will gain a greater sense of tolerance for an under-represented segment of our population – the migrant worker. There were parts of Tinoco’s story that made me smile and clap, some which made me laugh out loud, and yet others which caused tears. He has included it all here. Proud American will empower everyone who yearns for a better life to just do it!