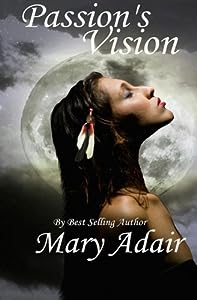 Love has a strange way of drawing together individuals that seem to not only be extremely unlikely to meet, but are diametrically opposed to ever create a bond. Passion’s Vision by Mary Adair explores this truth as the female warrior, New Moon, struggles with a destiny that has been revealed to her in a vision of man whose “hair is the color of the river’s clay and whose eyes are the color of a summer sky.” Having lost her husband, she has sworn to belong to no other man, regardless of the will of the Great Spirit. James Fitzgerald is the embodiment of New Moon’s vision and she knows it the moment she lays eyes on him; however, she will not easily give up her determination to belong to no other man. As James carries out the task that had been given to him by King George, bringing Cristoph DuPrey to justice, the deeper conflict of the heart of the two warriors rages in full force. Passion, duty, language and culture struggle with each other as destiny tumbles them forward like a cascading river.

In Passion’s Vision, Mary Adair has not only captured the essence of the struggle that was taking place as white men and natives struggled to advance their own visions for the new frontier, but it also digs into the deeper struggles of the heart. The stubbornness of the mind and determination may hold fast to what is believed to be the best course, but chemistry, desire and passion often have a way of continuing to assail the heart until it gives in. Mary does an excellent job of telling both of these stories and of drawing the reader into a deeply emotional response to the characters involved. Passionate, realistic and intense, Passion’s Vision will draw you in with an irresistible desire to bring the two protagonists together as you become enmeshed in the struggle along with them.