Orville Mouse and the Puzzle of the Sagacious Sapling 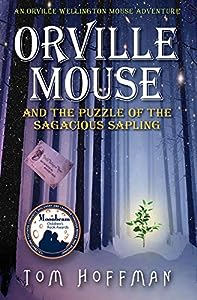 There is much wisdom and humor in Tom Hoffman’s final installment of the Orville Mouse Adventurer series: Orville Mouse and the Puzzle of the Sagacious Sapling. But it’s hard to tell the difference.

“Sophia says the things you’re used to never seem weird.”
“Anyway, how do you know ants don’t throw up when they’re upside down?”

Devoted fans familiar with this terrific series (including old adults who hide behind reviewing jobs to disguise their guilty but glee-filled indulgent pleasures) will greet with happy recognition this latest and greatest metaphysical adventure starring Orville and Sophia, their sidekick Proto the Rabbiton with his tag-along robot dog, Squeaky, and introducing a most sagacious new little buddy, Leaf.

No need to reveal the plot line of Orville Mouse and the Puzzle of the Sagacious Sapling. Tom Hoffman’s uniquely appealing creation, mighty but fearful Orville, declares it precisely: “Let’s go save the universe.” What does need mentioning is the incredibly satisfying and stimulating camaraderie of Hoffman’s characters as they band together to fulfill – against some mighty intimidating and powerful odds – such an infinitely important mission. What holds readers glued to Hoffman’s books and keeps them coming back for more is the deeply human warmth and friendship shared between such small but courageous creatures. In the end, it is these friendships based on love and humor that assure our grand crusaders' ultimate success. And, along the way, generous allotments of subtle wisdom and tasty snapberry pies for me. Er … for us, the appreciative readers.