A Soldier's Journal in a Veteran's Reunion 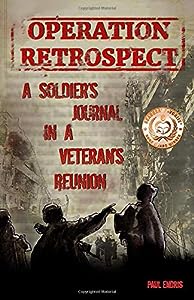 Operation Retrospect: A Soldier’s Journal in a Veteran’s Reunion by Paul Endris moved me on many levels. I loved it. The places where it reached me are many, and they are very personal, so I realize it may not move others with the same power. So, let me tell you why it moved me, and you be the judge as to whether or not it will mean the same for you. First, I am a veteran and any book about the military, especially the modern U.S. military, is interesting to me. Second, I was an infantryman, 11B, like the men this book mentions. Next, I was in a special program that the Army initiated at the time I joined. It was called COHORT. It was based on the British Regimental system. We went through Basic Training together and served side by side for our entire term of enlistment. We became brothers. Eventually, brothers in arms. The last reason this book touched me was because I was there. I knew the triumph and frustration associated with serving in Iraq.

I can testify firsthand that the events of Operation Retrospect are authentic. This book is the real thing. The way the story is told is perfect. We move back and forth from Paul’s wartime journal to the reunion itself. The writing is great, capturing all the emotions of war and all the complications of being back home. The setting is perfect. Paul captures the tone and feel of wartime Iraq and the complexity of being back home while often reliving events of the war. The characters are great. I served with guys exactly like these men and the pictures really added to the story. I could also relate to how crucial Paul’s wife Kat was to his eventual assimilation back into normal life. That was true for so many of us. So that is why I loved Operation Retrospect. I think many of you will too, even if it doesn’t touch you on all the levels that it touched me. Being American is level enough.