My Career as an Outlaw Rock and Roll Photographer 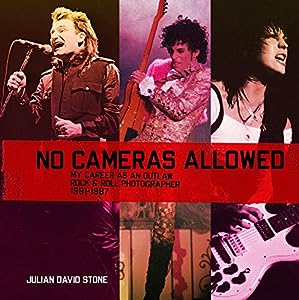 No Cameras Allowed: My Career as an Outlaw Rock and Roll Photographer is a nonfiction music/entertainment book written by Julian David Stone. Stone is a photographer, filmmaker, screenplay writer and author. As a child, he had dreams of becoming a musician, but his early misadventures with a French horn inspired him to consider photography as an alternative way to be a part of the music circuit. His earliest forays were photos taken at country fairs, but he really wanted to do more. When The Ramones were scheduled to appear at the Keystone in Palo Alto, the eighteen-year-old was ready to get some live pictures with his 35mm camera. He was somewhat taken aback by the club’s security guard’s refusal to let him in. What do you mean cameras aren’t allowed? While his first instincts were to go home, he decided instead to cleverly conceal camera, lens, and film on his person. His hiding spaces evaded even the pat-down the security guard conducted and Stone was in. It would be the first of his outlaw shoots of rock concerts across the country and overseas.

Stone's pictures have intensity and power, and the black and white format works so well for his art. His photos of Sting during the August 18 concert at Shea Stadium are surprisingly detailed considering the venue, even with the lucky burst of rain, and his coverage of U2 during their 1983 concert in Dublin, and the following year in San Francisco is inspired. Stone’s candid shots make the reader feel as though they’re present at each of these amazing concerts, up close and personal, and each picture gives new insights to musicians we’ve admired from afar. He may have been an outlaw taking all these photographs under the table so to speak, but his work is monumentally good. No Cameras Allowed: My Career as an Outlaw Rock and Roll Photographer is most highly recommended.