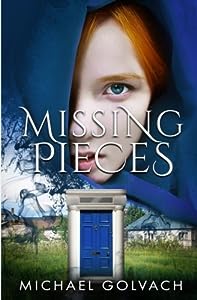 Missing Pieces by Michael Golvach is the story of a heartbroken woman whose life was all about misery, but one day her knight came and he swept her away from her demons. Mandi has not had a wonderful life. Being abused is not fun, especially when you are just a child. And now, even though she is grown up, she is not past all the abuse she suffered when she was younger. She still lives her life as she did before, but this time, she is depriving herself of all the love and affection she deserves. When Michael Skyler met Mandi, he felt a connection that he'd never felt with anyone before. Always having the feeling that he never belonged, he saw a kindred spirit in Mandi. But Mandi is very hard to woo, she is not letting him in. Can Michael bring down her walls? Can Mandi get past the scars of her past?

There is only one word that describes this novel: “beautiful.” The story is so powerful and poignant that you can actually feel the pain deep inside you. You become one with the characters and that is a major gigantic star for the writer. The story is moving, the characters are strong, and you will simply love them for being the way they are. Many times, writers are not able to write really good dialogues, but in this novel they are on point, like REALLY on point. The characters are beautiful, the story is beautiful, and the cover of the novel is just perfect! You do not want to miss this one; it is a novel that will stay with you for a long, long, long time.