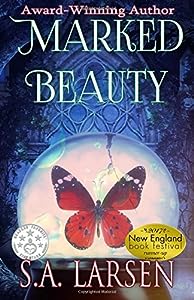 Have you ever felt you were different from everyone else? That there was something very strange about you and you must keep it a secret? That’s how Ana feels in S.A. Larsen’s Marked Beauty. She senses other people’s emotions through their life energy auras. Imagine knowing a friend feels sad, or angry, or dangerous. Could Ana’s strangeness be connected to her mother’s disappearance when Ana was young? Ana and her best friend survive a car accident and are saved by a mysterious passerby. While Ana recovers quickly, her friend remains in a coma. Ana learns she is the reason for her friend’s coma and the mysterious passerby had been watching her throughout Ana's entire life.

S.A. Larsen shares a beautiful tale of mystery, love, and romance in her Young Adult fantasy novel, Marked Beauty. The writing is simply amazing and I felt as if I walked beside the main characters throughout the story. The alternating point of view between Ana and another character added depth to the story and deepened the mystery of why their paths were so intertwined. Actually, this story reminds me of the Twilight series mixed with some of the Sooky Stackhouse books. Readers will fall as much in love with the characters in Marked Beauty as they did in the Twilight series. I highly recommend Marked Beauty for any reader who loves fantasy, romance and mystery. You will be surprised throughout, but you will not be disappointed. Your energy aura will glow happy when you finish the last page!