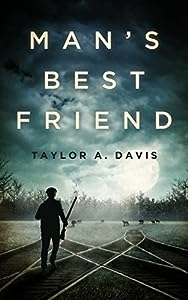 Man’s Best Friend by Taylor A. Davis is a short story based in the time of The Great Depression. One of the “Wild Boys,” Thomas, is shackled and journeying by ironclad steamer towards a state prison. But what events and experiences occurred to bring him to this point in time? As Thomas looks back, the reader discovers the actions and behaviours of the characters that eventually caused fate to unfold as it does. Discovering the betrayal of his friend, Thomas reaches new heights of anger and fury, and unleashes his revenge in shocking ways.

Man’s Best Friend is a competently and carefully plotted story which moves between the present and past moments of the characters. I found this a page-turner of a story and was intrigued from the beginning. It has both pace and depth. As the scenes gradually unfold, the pieces of the story fit slowly and revealingly together. Taylor Davis is an excellent young writer and storyteller, using particularly vivid descriptive language. He has a wonderful perception of his characters’ emotions, motivations and behaviours, bringing their individual personalities, hopes and despairs alive.

The characters are strong, well-defined and believable. I liked the suggested connection between the thundering onward of the steamer, or the seemingly endless trail into the horizon of the tracks, and the way choices, frustrations and despair lead to such a disturbing and seemingly unavoidable fate. This is a tale that explores aspects of humanity in a real and gripping way. Entertaining and perceptive, it is a powerful and suspense-filled short story. Recommended.