A Memoir of Life, Love, and Caregiving 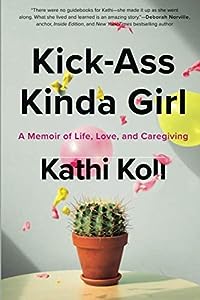 2019 Indie Excellence® Award Winner • 2019 Independent Press Award Winner • 2019 Reader's Favorite Silver Medal Winner • 2019 Book Excellence Award Finalist
Kathi Koll's acclaimed and award-winning memoir is both a love story and a survivor's tale in which Koll courageously unveils an unexpected life of joy, adventure, heartbreak, and even little laughter as she shares the realities of life as a full-time caregiver.
When her husband, Don, called on his way to the hospital, Kathi Koll had no idea how dramatically their lives would change or how her loving heart and indomitable spirit would fight it. From childhood, her life might have seemed charmed —play dates with Lucie Arnaz, real dates with a future TV idol, and a big brother engaged to film star Dolores Hart. But behind the scenes, her role as a caregiver began early with a mother dying of cancer, a father battling alcoholism, and a brother diagnosed with a debilitating disease. Then Kathi found Don Koll--her "rock"--and their joie de vivre and unstoppable moxie made everything feel possible. Until Don woke up "locked in" after a catastrophic stroke.
With raw honesty and refreshing humor, Kathi shares the realities of a life in uncharted territory as a full-time caregiver, from turning her home into an ICU to trying to regain a couples' intimacy. Her ability to share sorrows while laughing at herself helped her find a "new normal" where she and Don could live each day to its fullest. Koll's journey is a powerfully moving tale of resilience and finding inspiration--at the best of times and under the worst of circumstances.
Contact Author -