The Drug Trial of The Century by The Sole Surviving Defendant 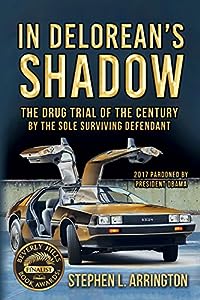 Here is a story that every publisher and media house should be scrambling for, and it beats me that it is self-published, because it is well-written, a powerful documentary that readers would enjoy on screen. I wish to shout out to the big movie giants out there: “Make this book into a movie.” Yes, because it reads like one and fans of Narcos will love it. In fact, I never knew Pablo Escobar was real. I have always thought of him as a character in the series, because while his trial was going on, I was busy chasing life. Now, let’s get to the book!

In DeLorean's Shadow: The Drug Trial of The Century by The Sole Surviving Defendant by Stephen Arrington is so well-written that one would doubt it is the work of a former criminal and ex-convict. Pardoned by President Obama in January, 2017, the last remaining defendant of the drug trial that rocked the media shares his story and fills in many loopholes and answers questions that have been left hanging, thanks to the machinations of the system. The reader gets an insider story of the key players in the Medellin Drug Cartel led by Pablo Escobar, including his #1 hit man, Rafael Salazar, the author, and others. Armed with insider information and the investigative reports, transcripts of FBI secret tapes, and court exhibits presented by the FBI, as well as findings by the law firm hired by DeLorean, the author brings to light what the FBI has kept hidden from the public — the whole story.

But this book is more than a narrative of the case and the activities of the drug cartel. It is a spiritual journey, a story of one man’s passage from utter darkness into the light. It was surprising to find out that the author runs an organization that improves the standards of living for people in poor areas around the world. In DeLorean's Shadow is a story of hope and it is stunning in its message, in the craft — filled with images and facts — and in the incredible journey and the transformation of one man once consumed by darkness and greed. If there is one book, one nonfiction book, one inspirational book you must read this year, let it be Stephen Arrington’s story. It doesn’t fail in any aspect! Great dialogues, awesome scene narratives, and an evocative , spellbinding style of writing.