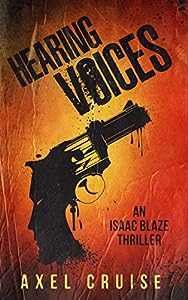 Hearing Voices: An Isaac Blaze Thriller by Axel Cruise is the story of a man named Isaac Blaze. Some might call him crazy, some might call him a sociopath, but to himself, he is just Isaac Blaze. He has two voices in his head; one is that of a British man (cool, sexy and very suave) and the other voice is that of a woman (just as unhelpful as you could expect). Needless to say, people think he is trouble and some might even agree with it wholeheartedly. He is trouble and finally a SWAT team has got hold of him. Now what can he do? Can he escape and get away before they actually “break” him? How did they find him in the first place, because the closest relationship he has is with the two voices in his head? What happens next? You will have to join Isaac to learn what happened next.

You know you have hit the cool character jackpot when the first sentence of the book starts with this much action. I love Isaac and his ability to cope. He is very much like a realistic version of Deadpool and there is nothing about him that I don’t love. I love the two voices in his head and I am very partial to his twisted humor. Hearing Voices started with a bang and Axel Cruise kept the momentum going until the very last sentence. This is one of those novels that you are glad you choose and you keep on going back for more again and again. Isaac is definitely an unforgettable character and if you do have the audacity to forget him, he will come back with a vengeance to get your attention once again. I really enjoyed it. Great character creation!