Giants in the Land

Book Three: The Cavern of Promise 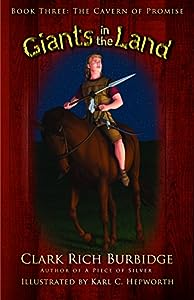 The Cavern of Promise is the third and final chapter in the Giants in the Land trilogy by Clark Rich Burbidge. Thomas and Herdshepherd's journey to the western lands is cut short by an ambush in which Thomas is captured. Although left for dead, Herdshepherd's purpose is not finished and, with the guidance of Rachael (deceased wife of Thomas), he will serve to aid the living. The attack on Thomas and Herdshepherd threatens the peace that was delicately crafted after a deadly battle that left behind a millennium-long rift between the giants. From here on, every party must tread carefully if there is to be any hope of peace prevailing. While Earthwatcher and Forestmaster make the sad journey back home with Herdshepherd's remains, Rose, Marcus and Tom set off on a near suicidal mission to rescue Thomas. Thomas's people are racing against the clock to rescue him from the hands of the ruthless king of the western lands and to do so without any major disruption to the fragile peace. Thomas will face a most trying time at the hands of the king, but will emerge from his trials as the beginning of hope for the oppressed people. But first, he will have to survive a deadly match against a most vile of giants. Only then will there be hope for all - a journey to the mythical Cavern of Promise hangs in the balance.

Just as in the first two books, Clark Rich Burbidge's work in this final part of the Giants in the Land trilogy is simply incredible. The Cavern of Promise brings an amazing story to an end in a most fitting way. Clark Rich Burbidge's skill comes through in every bit of the story including such aspects as the carefully selected character names that strike a delicate balance between matter of fact and elusive mystery; defining each character's place and purpose in the land, but with a hint of something more. The Giants in the Land trilogy is a profound read that goes beyond the amazing story telling to share invaluable lessons. Man has a lot to learn from the story, including such lessons as to always choose love over hate and peace over war, and to always hold on to hope, even in the most trying of situations. Our leaders could learn so much from the doctrine of The Way of Things, as would all of us. I was most profoundly touched by this statement uttered by a grieving father who chose peace over avenging his son: "What good does hate and revenge do if the result is that I become what I hate?” These words will forever ring loud in my mind. If you have read book 1 and 2 of the Giants in the Land trilogy, you will definitely have to read this remarkable conclusion to the story, and if you have not, you are missing out on a truly worthy fiction fantasy read.