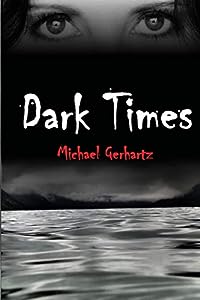 In Dark Times by Michael Gerhartz, we meet Natascha. Once framed as a most-wanted terrorist, all Natascha wants to do now is live her life with Nick and the daughter they have together. She works part-time as a marine biologist at the London Aquarium and as a secretary for a security company but when she gets involved in a scientific expedition, things turn nasty. Finding herself in a flooded mine underneath an old abbey, she learns a secret that the clerics don’t want anyone else to know. Natascha now has her work cut out to stay ahead but her past is about to catch up with her. Nick and some friends follow her but they must solve the mystery if they are to find Natascha in time.

Dark Times by Michael Gerhartz is a thrilling story from start to finish. The very first page hooks you and pulls you headfirst into an adventure that will leave you breathless. Just when you think you’ve got it all figured out, off you go in another direction, down another path with more clues and more intrigue. This is a fantastic book, really well written with some great characters in it. It is properly paced, with plenty of action and suspense that leave you guessing right to the very end. There’s a whole range of emotions in this story and you will struggle to put it down. I thoroughly enjoyed the book and am really looking forward to the next one. Highly recommended for fans of thrillers or those who just want a really good story to lose themselves in.