An Epic and Inspiring Travel Adventure 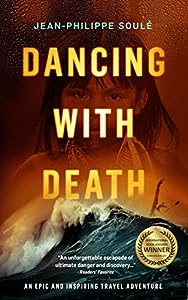 Dancing With Death is billed as ‘An Epic and Inspiring Travel Adventure.’ It is most certainly that. The dancing with death element, however, seems to be due in equal parts to the bold adventurism of its co-authors, Jean-Philippe Soulé and Luke Shullenberger, and their often naïve, some might say foolish, risks of unpreparedness. But these two travel partners are quite candid about their foibles (like an obsessive phobia about man-eating crocodiles), as well as their sometimes friction-filled moments resulting from fatigue and basic personality differences. So the fruit of their disparate but complementary perceptions is a deeply engaging, truly mesmerizing account of ocean-going survival and contact with indigenous jungle tribes inhabiting the southern world, all part of the “Central American Sea Kayak Expedition 2000 (CASKE 2000), a three-year, 3000-mile paddle across seven countries from Baja California to Panama, alternating between the Atlantic and Pacific coasts” – brainchild of Jean-Philippe.

"We chose sea kayaking as a low-impact way to penetrate untouched jungles and their inhabitants without disturbing them. We won’t meet indigenous people as high-tech tourists, but as people like them, living from the land and sea." This admirable and ambitious decision by Jean-Philippe Soulé and Luke Shullenberger lends David and Goliath drama to the epic tale of adventure related throughout Dancing With Death – not, in fact, a hyperbolic title. Told as a recreated narrative by Jean-Philippe, but also spiced with present moment vividness from journal entries made at the time (including many enticing photographs and ecological observations), these two ambitious souls take the reader on an unforgettable escapade of ultimate danger and discovery, inspiring less intrepid souls with displays of eclectic survival traits - like athleticism, boldness, ravenous curiosity, and endless buckets of uncanny luck. Even when confronting crocodiles.