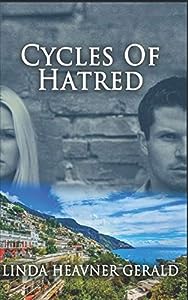 Cycles Of Hatred: Will He? by Linda Heavner Gerald was a hard novel to read because it hit home with me and I am sure it will do the same for many other readers as well. The author opened the novel with a prayer, which made it even more raw and intense for me. The more I read, the more emotional I became. Women have to fight such toxic behavior every day of their lives in many countries and Laura represents all of them. She is vulnerable, strong and resilient at the same time, which makes her a great heroine to connect with.

This is the story of a woman named Laura, who has to fight the misogyny and hatred of a family member. She does not know what she has done to deserve the hatred of her twin brother, but it is still there. Her family kept them apart for years so that Laura could blossom and have her life, but now things are different. Lars is her twin and, even though he hates her, she loves him dearly. Now years later, the two meet again, but with the same results. What has Laura done to deserve this? Can she do something to save their relationship?

Reading this novel felt personal; it felt like I was talking to a friend who was going through a hard time and I could do nothing to ease her pain. It left me feeling raw and open for a long time and I had to stop and compose myself before reading on. Laura was vulnerable yet she was strong when she knew she had no one that could protect her but herself. She knew she had to rely on herself to survive and that’s exactly what she did. To say that I enjoyed this absolutely terrific novel will never be enough.