Would You Kill Your Brother to Save Yourself? 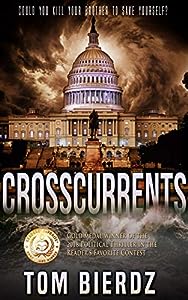 A political thriller at its best, Crosscurrents: Would You Kill Your Brother to Save Yourself? by Tom Bierdz presents readers with a powerful moral dilemma. Brothers Demetrius and George Tobias were separated at a young age because of their father’s mistakes. George becomes a crusading senator while Demetrius, with the first twelve years of his life blotted out by amnesia, becomes a skilled hit man for hire. He is contracted for an enormous sum of money to take out a politician, and even if he doesn’t understand why this job is so urgent, he accepts it. While he is about to unknowingly take down his brother, a blow on his head lifts the amnesia and he learns the truth. Demetrius has to choose between saving his brother or himself at the last moment. His choice and what follows will stun readers.

Tom Bierdz injects his characters with enough soul searching, risk, and compulsive action. It’s a thriller with a compelling premise and the follow-up is as strong as it is unpredictable. I enjoyed the compelling cast of characters, the balanced and focused writing, and the deft handling of plot elements which are enriched by the strong conflict. The story alternates between points of view, with a setting that readers from Greece to America will recognize. Demetrius is a complex character and readers will be eager to see how he evolves throughout the narrative. The plot has resonant themes of political intrigue, crime, and family, all masterfully integrated into the build-up of the conflict which moves the narrative to an explosive conclusion. Crosscurrents is a page-turner, with exquisite writing and deft plotting.