Collaborative Leadership for Classroom and School 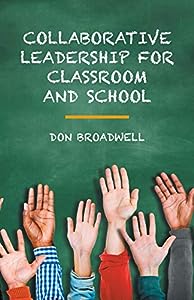 Collaborative Leadership for Classroom and School is a non-fiction academic management text written by Don Broadwell. Broadwell's early management style was an authoritarian one based on his experiences in the US Marine Corps; however, a career counselor's advice led him to explore other management options, ultimately ending in his study of collaborative leadership. He is the director of The Collaborative Center and has been training teachers in the collaborative method for the past thirty years. He begins this work by defining what a leader is, and he compares the different leadership models seen throughout history, from the strict authoritarian to the more modern servant leader. Broadwell describes collaborative leadership and gives numerous examples in industry, the classroom, and even as a tool that allows parents and children to feel involved and committed to the decision making process. He discusses the strains and stresses put on the education system, teachers and students during the No Child Left Behind initiative, and highlights the differences of today's children from previous generations, their expectations and their potential. Broadwell includes a List of References, a Facilitation Flow Chart for teachers and a Collaboration Base Chart in his appendices.

Don Broadwell's Collaborative Leadership for Classroom and School addresses many issues I have found troubling in today’s education process. One reads all too often of highly rated, trained and committed teachers who leave the profession after several years, citing disillusionment with an educational system that puts testing above the needs of students and teachers. The presence of police on public school campuses and their increased role in "discipline" and enforcement of authority is likewise disheartening, as it seems only to create an increasingly hostile environment that's not at all conducive to learning. Broadwell's leadership approach is brilliant.

As I read his chapters describing how collaboration works best, I wished I had known about this when I was a manager sandwiched between the needs of my staff and the demands of a management committed to downsizing and instilling in their employees the belief that they existed to serve their superiors as if they were valued and demanding clients rather than encouraging workers to feel that they had a stake in the firm’s functioning as valued members. I remembered hours of unproductive staff meetings and frustrating encounters with management that could have been done so much for employee morale and productivity when approached using a collaborative leadership method. After President Obama's interest in collaborative leadership in the schools, I share Broadwell's hopes that the current administration continues to define an education policy that makes each school "a place of vitality and excitement rather than fear and loathing." Collaborative Leadership for Classroom and School is most highly recommended.