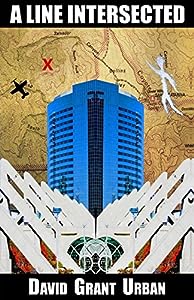 A Line Intersected by David Grant Urban is a tale of distressing fortunes. Michael Collwood is a reputable architect in San Diego, a man loved by the people until his wife is murdered by means of a drug overdose. He becomes a person of interest in the case, and with that comes a swift and downward spiral in his life. With the support from friends gone, his career destroyed, and no home, he turns to the one thing to which despair leads men — alcohol. Time has gone by and there is no update on the case and, tired of living without his self-respect, Michael sets out for the wilderness where he intends to end his life. But a surprise awaits him, a fortune that will put two million dollars into his hands ... and a hundred kilos of cocaine. Now he has a purpose — to uncover the face behind his wife’s murder. He just doesn’t know what awaits him, and it would be best for readers to find out themselves.

This novel is successful on multiple levels. I was pulled in by the author’s storytelling skills. The story begins at a slow pace, with descriptions of a homeless old man, his love for literature, and his wisdom, and gracefully transitions to a memorable day that the protagonist shares with his beautiful wife. It’s a brilliant prelude to a crisis point! The author introduces the crisis in the second chapter of the story, and from then the reader is pulled into a whirlwind of action and intensely emotional scenes, until the conflict escalates to involve the DEA and the Tijuana drug cartel. David Grant Urban writes with grace and his prose offers the precision that readers long for when they read crime and investigation novels. The protagonist is a deeply wounded man and his quest for revenge comes across just so naturally to readers. I found A Line Intersected to be a satisfactory read and won’t hesitate in giving it a 5-star rating.