A Child's Memories of the Civil Rights Movement 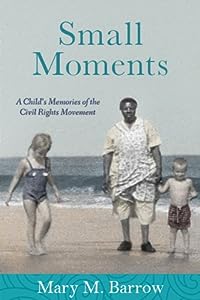 Small Moments: A Child's Memories of the Civil Rights Movement is a young adult, coming of age creative memoir written by Mary M. Barrow. The family's move from Chattanooga, Tennessee, to Trenton, New Jersey, was made in two separate stages. The twins, Michael, Amelia's husband, Peter, and Mary's parents were in the family car for the long trip up north. Mary and her younger brother, Chuck, traveled by train with Amelia. It was a long journey made longer by the fact that they were unable to use the sleeping car that had been purchased by Mary's father, because Amelia was an African American. She sat up during the two-day ride and nestled a child on either side of her as they slept. Mary and Chuck would not have been anywhere else, except for home, and especially not in the car where Michael would be getting punished again. Amelia was comfort and love and strength; she was their world.

Mary M. Barrow's creative memoir for young adults, Small Moments: A Child's Memories of the Civil Rights Movement, is a profound and memorable coming of age story set in the late 1950s and 1960s. Mary sees the Civil Rights Movement in a markedly different way than her racist father or even her more progressive mother does, and she shares that vision with the reader in this oh so moving tribute to the woman who became a mother, mentor and guardian. I loved reading Barrow's collection of memories, especially those concerning the summer on Block Island: Mary's turn to go out into the deep water and learn to master the waves with her mother, and the blackberry hunt with Amelia. Even more poignant were the passages detailing those times spent listening to Amelia as she shared her past memories with her two young charges. As I finished, I felt as if I had gotten to know a very special woman indeed, and I'm privileged to have done so. Small Moments: A Child's Memories of the Civil Rights Movement is most highly recommended.

Understanding the Soul of Home Be prepared: Homeless Hero: Understanding the Soul of Home by Mike Tapscott will forever change your view of the homeless people in our country. This book presents a thorough examination and understanding of a group of people in Phoenix, AZ – these people include the homeless, the staff (from the volunteers to the Directors) of a group of agencies addressing their needs, and even a local police officer. Mike Tapscott’s interviews with these folks do not focus on how the homeless arrived in this place; rather, he focuses on the humanity of each person. Each interview ends with the same three meaningful questions, and the answers given are truly poignant. And he includes his own thoughts and reactions during the interviews, and during his brief immersion as a homeless person.

Mike Tapscott’s book, Homeless Hero: Understanding the Soul of Home, delves deeply into the hearts and souls of the homeless, as well as the people who are committed to ending this distressing phenomenon. It is a well-written, moving account of his experiences. By revealing the human soul of the homeless, we become aware of the similarities between “them and us,” and quickly realize there are no discernible differences between them and us. By acknowledging the human connectedness each of us has to every other person - even the homeless - we learn to grow in compassion and kindness. Mike Tapscott shares his personal journey of understanding and acceptance. Any reader who spends reflective time with this book will also grow in acceptance of the homeless as worthy human beings, and perhaps be called to action in some manner.

Harness the Power of Twitter to Create a Happier, Healthier Life 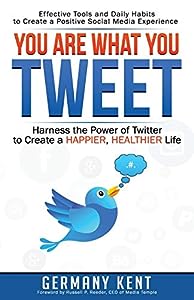 You Are What You Tweet by Germany Kent is a guide to becoming Twitter savvy fast, and is a good reference to pick up the best Twitter etiquette. A very important part of using Twitter as a communication medium, the author tells us in the beginning, is to “Say something worthwhile and people will listen.” A brief discussion on the background of Twitter and a bit more detail on the protocols and manners to be adhered to follow next. The power of Twitter, as the author mentions, is to educate, entertain and to evoke emotion - the specifics of each of these is given due attention in this book. The importance of forming a strategy and how that will depend on the role one would assume in Twitter, as well as the methodology of adding vitality to one's Tweets and related issues are also covered.

You Are What You Tweet by Germany Kent is not just a practical guide. I found it greatly helpful in creating my strategy. The author has provided bulleted lists and other tips with every new introduction of a concept, enabling quick reference and review. A comprehensive Twitter glossary and list of Twitter services that improve one's efficiency, by creating and scheduling your Tweets, and other tools that help one track performance are also included in this book. This makes it helpful in learning the nuances of Tweeting. Overall, this is a very good book, an exceptional product from an ‘overtime’ author.