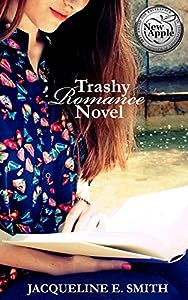 Some writers dream of fame and fortune when they put pen to paper; she only thought of her celebrity crush and how they’ll only meet in her written fantasies. At least until her stories became bestsellers and turned into a television miniseries. Jacqueline Smith’s Trashy Romance Novel chronicles Delaney Brooks’ whirlwind adventure in Scotland as bestselling author Lorelei DuBois. Brooks (aka DuBois) and her best friend, Gemma, who is introduced to everyone as her personal assistant, meet the star-studded cast that will bring The Surrogate series to life. She’s especially thrilled and a nervous wreck when her longtime celebrity crush Matthew Kent is playing the role she based his character on. Being in Scotland takes her breath away, but not as much as when she meets Hollywood bad boy Colin Ward. Sparks fly in the enchanted country, but do they last after the final wrap?

I could not put Trashy Romance Novel down for more than ten minutes without wanting to dive back in. Jacqueline Smith portrayed Delaney Brooks, a shy writer who never expected to make it big, so well that I identified with her instantly. The snippets of The Surrogate novels brought a nice touch to how Delaney and Gemma ended up in Scotland in the first place with all these movie stars – it was not just an implied fact that is almost forgettable as the story moves along. The book also shows how movie stars are really human beings like everyone else – they have jobs, fall in and out of love, and learn from their mistakes. I especially loved reading how Delaney’s love for Colin evolved similarly to her character Corrine’s love for Tristan; I am glad Delaney was able to get her happily-ever-after in the end.