Thomas Wildus and The Book of Sorrows 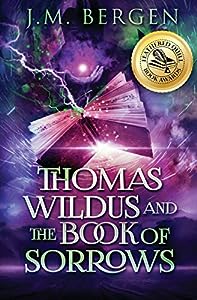 Thomas Wildus and the Book of Sorrows by J.M Bergen is a stunning fantasy novel about a twelve-year-old boy named Thomas. When Thomas was really young, his father told him that magic was real right before he left him. Thomas lived his life as an ordinary boy, until one day he asked about magic at a bookstore and was given the Book of Sorrows. Thomas soon learns that he has magical powers and is flown half way around the world to learn how to use them. He also learns that much is at stake, and that he has to protect a magical crystal from a man named Arius. Will Thomas rise to the challenge?

I really enjoyed reading Thomas Wildus and the Book of Sorrows by J.M Bergen. The book was very descriptive and incredibly well written. The plot was intriguing and well thought through. I liked that the author had a new take on magic. There were funny parts throughout the story that made me giggle. The book has many plot twists that will leave the reader wondering which characters they can trust. The book will hook readers from the first page, and will keep them wondering what happens next throughout the story. The story had many extremely exciting scenes that will captivate the audience. The characters were very likeable and realistic. They were also very inspiring because they make the right choices. This book will entertain readers of all ages. I would definitely recommend this book to everyone.