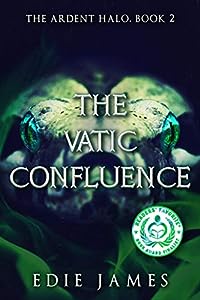 The Vatic Confluence by Edie James is the second installment in the epic fantasy series The Ardent Halo, following in the footsteps of book one, The Steel Road. The story is told from multiple points of views, giving readers varied and fresh views of the expansive world of Arizware that James has built. The world has changed and the coming of a storm sets the stage for the continued adventures of Dreyah (a half-human, half-elf crossling) and Kennason, the lady steward, who is uncomfortable and precariously perched in a scheming royal court, waiting for her own opportunity to strike. This is a story of survival, not just of self and family, but of the people and the future. This is war.

Edie James delivers a masterful book two with The Vatic Confluence, further elevating two worthy female protagonists in a world that is depicted beautifully. The writing is clear and eloquent, and the characters dance comfortably within the narrative, the dialogue, and their internal thoughts—some of which provided my favorite ones in the book i.e. “The tongue talker is the shadow thief... Let the lady steward hear the truths he has stolen from her.” The battle scenes are so perfectly drawn that they unfold seamlessly, driving a reader from one scene to the next and unveiling a climax that explodes onto the page. Even ancillary characters come to life, but it's Dreyah and Kennason who, both jointly and independently, keep the pages turning. I would absolutely recommend this to readers who love first-rate epic fantasy.