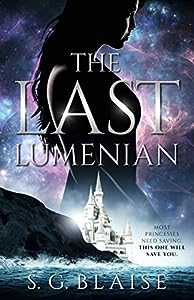 The Last Lumenian is a lavish and engrossing work of fiction in the fantasy, action, and adventure sub-genres, and was penned by author S. G. Blaise. Written for young adult and adult readers alike to enjoy, this immersive tale introduces us to a princess unlike most others, whose fortitude and rebellious nature find her in a precarious position even from the novel’s start. Lilla takes solace in her rebel friends and surrounding servants as his father, the king, is lost to his madness. But when a new general arrives on the scene and a powerful Archgod declares magical war, Lilla discovers that the fight ahead of her is far bigger than she expected.

Author S. G. Blaise has crafted a fantastic escape from reality which is beautifully easy to fall into but very had to let go of at the close. One of the things that really captivated me about the work was its pacing and story construction, which leaves you wanting more and peeking ahead at the end of every chapter. As the story progresses and we learn more and more about Lilla, the character development and close narration give her an inspirational and emotional resonance that makes the story even harder to put down, resulting in a wildly inventive and intricately planned fantasy rollercoaster which delivers everything it promises. Overall, I would highly recommend The Last Lumenian for fantasy fans seeking strong female leads, solid worldbuilding, visceral action, and plenty of magic. A truly epic opening to an exciting new series.