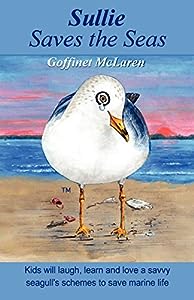 Tears course down Sullie’s cheeks as he looks at his once pristine beach now littered with plastic. His granddaughter was left crippled by the abominable stuff. Sullie called a meeting of his bird friends and shared the dreadful acts humans have committed. They bring their dogs to run on the beach leaving the dog poo behind. They smoke cigarettes and leave the butts behind. The vilest thing humans do is leaving behind plastic bags, plastic rings and other plastic items. The dog poo is poisonous to the ocean as are the toxic cigarette butts. When plastic is washed into the ocean creatures become entangled in it leaving them injured and often dead. Baby turtles and birds often eat the plastic beckoning their own death. Not all humans are so thoughtless. Many are horrified by humans who are inconsiderate, rude and uncaring. Emotions were stirred by Sullie’s accusations. The birds formed a plan to teach the humans a lesson.

"Sullie Saves the Seas" is a delightful read for elementary and middle school students. Author Goffinet McLaren’s characters are appealing, creative and generally engaging. The message in this book is one we humans have to learn. McLaren combines humor and action in a manner that will grab readers' attention and keep them smiling to the very end. He also offers tips on how to protect our environment, such as not using plastic bags, not using straws or Styrofoam cups, properly disposing of trash, cleaning up after your dog, and cutting up rings of plastic six pack holders. Thank you, Mrs. McLaren, for teaching our children the importance of taking care of our environment.